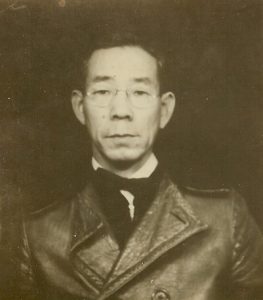 Born Takeo Furukawa on 15 March 1883 in Tottori-Ken, Tokyo, Japan, little is documented of his early childhood.  Family oral history stories say that the young Takeo experienced hunger, poverty and the loss of his family. Additionally, the stories tell of friendship, spiritual learning and scholarship. As a young man, Takeo became a Christian and attended a school founded by missionaries, Meiji Gakuin in Shirokane, Tokyo, Japan.  It is documented that Takeo graduated Futsu-Gakubu or high school in 1902 and Koutou-Gakubu or liberal arts and theology in 1905 from Meiji Gakuin.

The year 1905 was very significant in Takeo’s young life. Besides graduating from college, he also immigrated to the United States. On May 19, Takeo departed from Yokohama on board the Kanagawa Maru, arriving 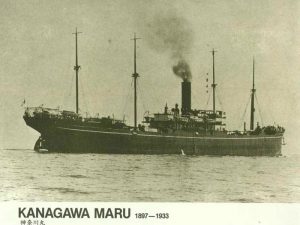 in Seattle, Washington on June 2.  It is documented that he had $100 and his final destination was Chicago with the intention to attend the university.  For reasons unknown, Takeo did not complete his enrollment at the University of Chicago and instead headed to Indianapolis, Indiana with the plan of enrolling at Butler College. Butler was founded and operated by the Disciples of Christ ministry. Takeo worked in service jobs to support himself, including as a bartender and steward at the University Club of Indianapolis. By 1908 he began writing his thesis for his doctoral dissertation, a process he would never complete. 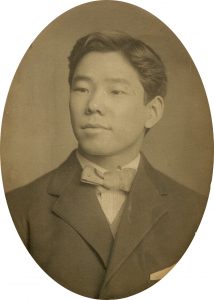 At loose ends, Takeo lived in a boarding house on W. 18th Street, worked tending bar and volunteered at several missions in 1910. It was at a mission that Takeo met his future wife Grace Osborne, a fellow volunteer. Grace was a young, divorced mother with a six year old son named Glenn. Takeo and Grace married on 30 December 1912. It was at this time that Takeo began using the name ‘Frank Flucawa,’ he believed it was easier for Americans to pronounce.

For awhile, the young couple rented rooms on N. Illinois Avenue, but eventually they got a small farm near E. 16th Street and Pleasant Run Parkway. Frank and Grace engaged in running a poultry farm, raising chickens, geese and turkey. At the time, the United States had laws in place that prohibited Asian immigrants from owning land, but this never seemed to be a problem for Frank. It may be that these laws were not well known in Indiana since they were primarily written for the more ‘xenophobic’ western U.S. 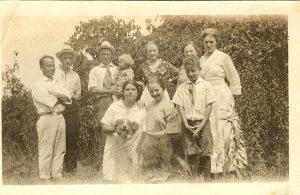 Frank and Grace often played host and hostess to various family gatherings on their little farm. Frank and Grace, along with their good friend Kisaburo ‘Shibby’ Shibusawa had created a charming ornamental garden on the property, perfect for family photos.

Life went on in a very pleasant manner for nearly 30 years for the couple, their family and their friends. Then 1942 came along, the United States declared war with Japan, Grace’s 94-years old father died, two nephews enlisted in the armed services and Executive Order 9066 was issued by President Roosevelt. There was a great deal of sadness at the Flucawa home; so much that the couple decided to move away from Indianapolis to a more rural area, New Castle, Indiana. 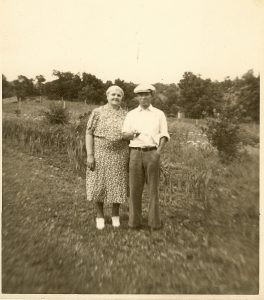 Executive Order 9066 caused the imprisonment of over 100,000 Japanese-Americans, all from western states. The suspension of basic civil rights was frightening to Frank and Grace, fortunately, application of the law was mostly non-existent in Indiana. Frank, and Shibby, did register with the local sheriff, but that was the extent of any action. It was during this time that Frank and Grace became Quakers, giving action to their objection to wars. They were both active in organizing local vegetable gardens, Red Cross fund raisers and writing regularly to their nephews overseas. Sadly, their nephew Carl died in action in Germany. But, nephew Robert returned safely from the south Pacific.

Life returned to a sort of normal after 1946, raising poultry again and now operating a commercial flower garden. First the garden was at Cherry Street and Hawthorne Road in New Castle, but eventually expanded to a larger property on South Memorial Drive. Frank and Grace enjoyed a great deal of popularity because of their beautiful flowers. However, in November 1954 Grace passed away and Frank lost his partner in life of nearly 42 years. 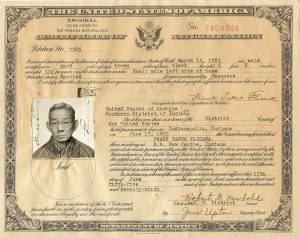 The Immigration and Nationality Act of 1952 basically repealed the 1924 act that had prohibited the naturalization of Asians, as well as many Europeans. Now that Grace was gone, Frank felt a certain practical need to become a U.S. citizen. So, on 17 June 1955 Frank became a citizen and legally changed his name to Frank Takeo Flucawa.

Frank went on operating ‘Flucawa Flower Gardens’ with the help of his good friend Shibby. But, in October 1964 Shibby left this world at the age of 82, leaving Frank on his own. Frank carried on as best he could, he was well past the age when many men retire, but that was not his nature. He kept active in his garden, judging flower shows around the state, mentoring other Asian Americans in the community and attending Quaker meetings. 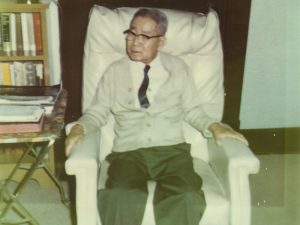 Finally, at the urging of his nephew Robert, Frank sold his hot house and flower farm property in 1968 and retired to a little house on S. 16th Street in New Castle. It was at this home that Frank passed peacefully from this world to his reward on 29 May 1974. Frank was laid to rest at Mound Cemetery in New Castle between his beloved wife Grace and his best friend Shibby.