It’s fun to find articles in the paper mentioning one of my relatives. I have found many news items in Indianapolis newspapers about my more recent ancestors. Mostly birth, marriage, divorce and death events. But, it’s the oddball articles in the papers I like the most. Find the articles described in the image slider at the end of this post.

My paternal grandmother, Pearl Osborne LaFara, saved many newspaper clippings that are among the ephemera I have inherited. One of my favorites is a photo clipping of her father, David Louis Osborne, with President Herbert Hoover. When I subscribed to Newspapers.com, one of the first items I searched for was this photo. I quickly discovered the June 1931 issue of The Indianapolis News with the image on page 17, where it was part of a photo collage [1] featuring the visit of President Hoover to Indianapolis.

Other news items I have found that mention my great grandfather, David Louis Osborne, regard his voting record. He was an active member of the Grand Army of the Republic, which is how he came to be photographed with President Hoover. So, I was not surprised he voted, but the fact it was noteworthy for the newspaper seems odd. The first item from November 1932 mentions he fainted on the way to his polling location [2]. I’m sure he walked there and it was less than a quarter mile from his home, 36 S. Ritter to the corner of Irvington Ave. and Washington St. The second is from May 1934 when he evidently went down to the poll and was recorded as one of the oldest voters, he was 87, and proceeded to tell them how voting was in “yesteryear’s.” [3]

I have also discovered information in the back issues of the Indianapolis papers regarding my great aunt, Sadie Osborne. Sadie was an Indianapolis police woman and my father told some pretty big tales about her. Sadie was the ancestor I first searched for in the online newspapers and I was not disappointed. I discovered the tales told by my father underplayed her role as one of two women who made history in Indianapolis by being given police powers in 1918. The newspaper articles told of her performing her duties as a police woman and some included  photographs of Aunt Sadie in uniform. But, my favorite article, because it is odd, has an image of Aunt Sadie holding the “Nation’s Largest Pigeon” when it was on tour at Tomlinson Hall (the farmer’s market) in February 1923. Sadly the scan quality is poor and The Star does not have the original [4].

One of the more official news items mentioning Aunt Sadie was about a police report she filed for a missing child in 1926. The child was soon found, in the bed clothes! [5] Too funny.

Another odd item regards my grandmother Pearl Osborne LaFara. When I found this news item I was a little surprised I had never heard mention of it since it involves an event that could have been fatal. She was struck in the head by a lamppost when a truck backed into it [6]. Since the news item does not report any major injury, I can only assume it was more of a close call, or perhaps lampposts in 1920 were much smaller than the ones we have now.

A final cute item from the Indianapolis News is a photograph of my father, Bob LaFara, and his sister, Pat, when they were children and participated in a local pet parade in May 1934 [7]. My father had a Guinea hen and Pat had a pygmy goat. I am fairly certain the “pets” were provided by my great aunt Grace Flucawa, she had a small truck farm in Warren Park.

As more papers become digitized I expect to find more news items in the paper about my family, most are just vitals but some are more enlightening. 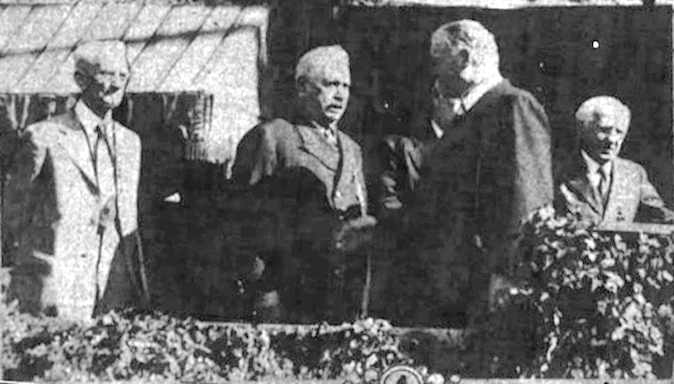 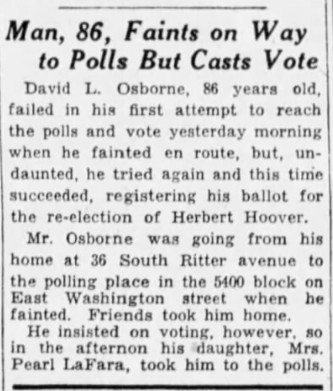 David Osborne fainted on his way to the polls in November 1932, about a quarter mile from his home. 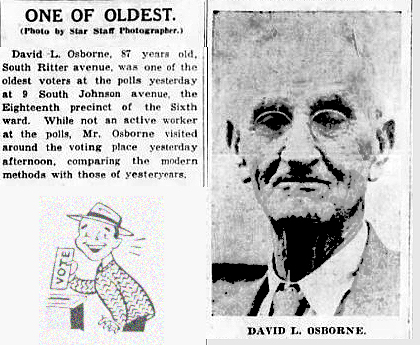 Among Oldest to Vote

David Osborne recorded as among the oldest voters at the polls in May 1934. 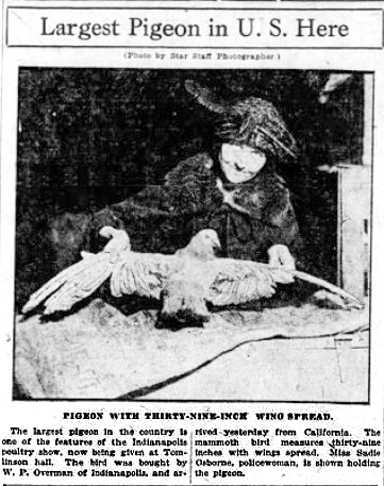 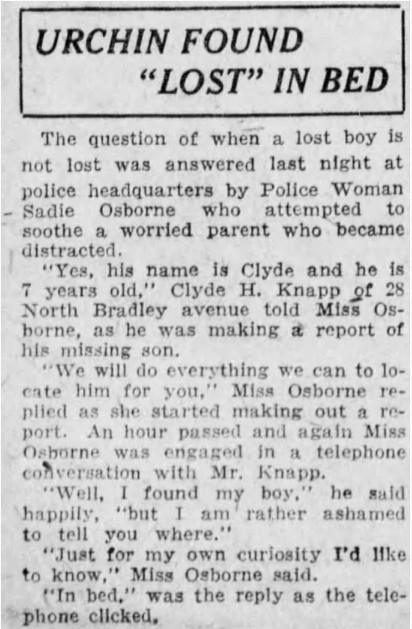 My grandmother, Pearl Osborne LaFara, was struck in the head by a lamp post in 1920. 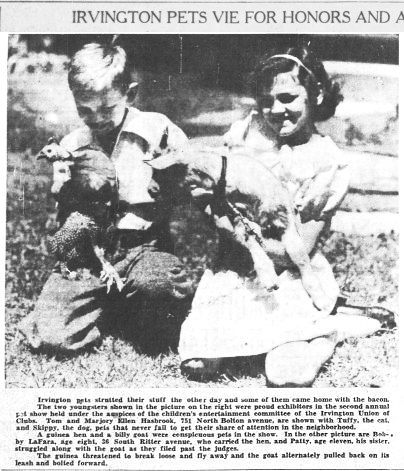 Bobby and Patty LaFara with "pets"

Bob and Pat LaFara at the Irvington pet parade in 1934 with Guinea hen and pygmy goat.