Names in my family tree are, for the most part, fairly usual. Given names are mostly from the Bible and, more recent generations, from popular culture. The surnames in my tree are typical of common western European names. However, the name that is unusual among these names is MY surname: LaFara. It has not always been spelled this way, only the past 110 years, or there about. If you meet someone with my surname, spelled in this manner, you can be sure they are a close relative of mine.

Having an unusual name has its benefits, but also some pitfalls. I have known both the positives and negatives first hand, but while doing genealogy research it becomes more amplified. The most challenging has been when my surname is made into two words, such as La Fara. The census indices sometimes interprets this combination as a middle name and last name. If I do not find an ancestor searching for LastName equals ‘laf*’ I then turn to ‘far*’. Also, using Soundex codes has been beneficial, L160 covers most of the spelling combinations, plus F600. (Discussing Soundex is beyond this post, but suffice to say it takes a name down to a numerical representation of the consonants.)

My immigrant ancestor was Johann Jacob Laffer of Niederlinxweiler (now in Saarland, Germany) in 1753. He was 19 years old when he arrived on the ship Edinburgh. I find his name being spelled Laffer, Leferre and Laffery [1,2,3]. None seem particularly German, his place of birth was in an independent duchy and bordered France.

For the first ten United States Federal Censuses taken, 1790-1880, my surname was spelled a different way in nearly every single one.

Perhaps the ever changing spelling was due to the family being illiterate and unable to tell the census taker their preferred spelling, if they had one. The 1850 to 1880 censuses asked if the respondents “cannot read” and/or “cannot write”, and sadly my 2nd great grandfather, George Lafary, and his parents, John and Sarah [Tucker] ticked off an affirmative to both questions. However, my great grandfather, John Lafary, was 16 during the 1880 census and answered in the affirmative the question of “attended school within the year” and the spelling of my surname continued to change. So was literacy a factor? I’ll never know. 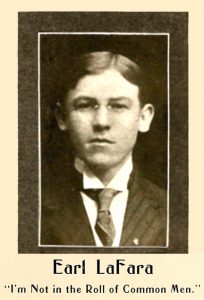 Although there is not an 1890 census, I do have my great grandparents’ marriage certificate from 1887 and the name is spelled Lafara [14]. In the 1900 census my great grandparents and their children are listed with the name spelled Lafarra [15]. For some reason, long forgotten, the family changed the spelling sometime between 1900 and 1907 to the current spelling. In my grandfather’s 1907 Tipton (Indiana) High School yearbook the name is spelled LaFara [16]. And so it has been for over 100 years! I have not found documents for the family to narrow down when the change occurred, or why. But, my grandfather’s senior yearbook quote is “I’m Not in the Roll of Common Men”, which may give some clue to the why. The quote is from Shakespeare’s “Henry IV”, spoken by Glendower and meaning he was not ordinary, but rather extraordinary. I prefer a more modern interpretation, I’m not usual but unusual.

← Sarah Smith: Challenge Admiral Byrd: I'd Like to Meet... →