So much about genealogy research is a challenge: finding vital records, reading old handwriting, obtaining research materials, etc. But, perhaps, the most common challenge is the ‘brick wall’. The dreaded brick wall, in genealogy, is the ancestor who defies being researched. For me, my brick walls have been mainly the women who lived prior to 1850 when family members were not included in the federal census’ and births were not recorded.

The most troubling of these is my third great grandmother on my matrilineal line. This is the ancestral line following only women/mothers. This line is the source of mitochondrial DNA (mtDNA) which is passed from a mother to her children, only women pass this DNA which means if you match mtDNA with someone you definitely share an ancestor on your matrilineal line. This mtDNA can remain the same over hundreds of generations with only minor mutations. I feel strongly I should know the women who have passed down my mtDNA, but I need to break this particular brick wall first. 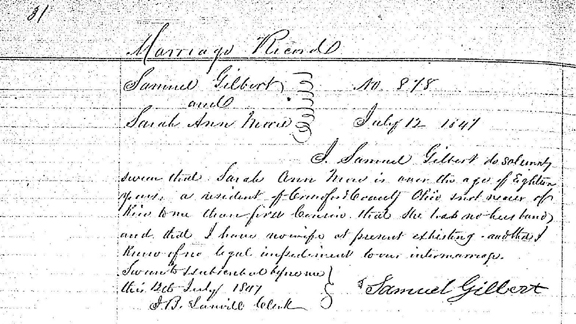 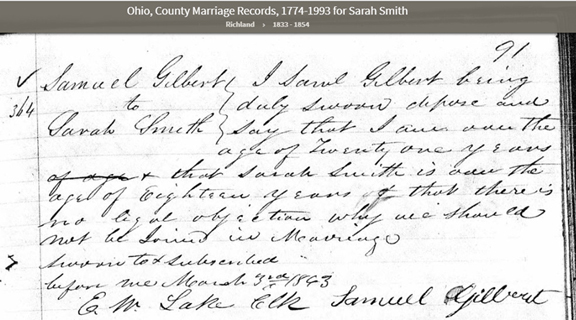 For several years, I thought I knew the name of my matrilineal third great grandmother, Julia Anne Mitchell, 1830-1908. This belief was primarily based on family oral history. After all, my great grandmother, Ella Rumple King, who died in 1962, knew Julia Anne and referred to her as Grandmother Gilbert. Then, a few years ago I was contacted by a ‘cousin’ who shares this ancestral family with me and he had obtained marriage records of both Julia Anne Mitchell and a Sarah Anne Moore to our third great grandfather Samuel Gilbert.

The record for Julia is clearly dated October 1850 [1] and the one for Sarah is clearly dated July 1847 [2]. So, Julia was out and Sarah was in… My second great grandmother, Hannah Gilbert, 1844-1874, named her eldest daughter Sarah and gave her second daughter the middle name Anne. So, Sarah Anne Moore, 1824-1849, was a good fit. Except… Hannah Gilbert is documented as being born in 1844 [3]. More research was required.

The Gilbert’s lived in Cranberry Township, Crawford County, Ohio during the mid-19th century [4]. The cousin who found the marriage records had traveled there and done the research, but he had found no records predating the 1847 marriage record. Samuel Gilbert, my third great grandfather is also a brick wall. I do not know who his parents were, or exactly where he was born. Census records, and his death record [5], indicate he was born in Pennsylvania in 1812, but that’s all they reveal. The surname Gilbert has proven to be a challenge. However, I did find a land record online for the purchase of the land in Cranberry Township dated in 1835 and indicating Samuel lived in Stark County [6]. As a side note, Samuel bought this land as ‘tenants in common’ with a man named Philip Immel. Naturally I thought Stark County, and possibly Philip Immel, could be a clue to an earlier, pre-1844, marriage for Samuel. But I was wrong.

I could not find Samuel in the 1840 census for Stark or Crawford Counties and I could not find a marriage record for him in Stark County either. I did find Philip Immel in Cranberry Twp in the 1840 census with a wife and children [7]. I researched Philip and found he had a sister, but she did not marry Samuel Gilbert. I did discover that Philip and his wife named a son born in 1849 Samuel and a daughter born in 1854 Julia Anne [8]. Obviously the Immel’s and Gilbert’s were good friends. I noted that the Immel’s had daughters born in 1842 and 1845, were they a clue to who my third great grandmother was? So I searched for women named Lovina and Amanda in Stark and Crawford Counties, but to no avail. I also looked at Mrs. Immel’s sisters, surname Noyer, but none of them married a Gilbert. I am rather envious that the Immel family is better documented than my Gilbert family. 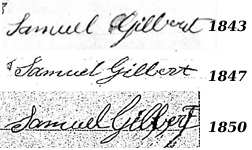 For a long time I thought I may never know who my matrilineal third great grandmother was, but then in 2016 Ohio marriage records were digitized and added to Ancestry.com. A simple search for Samuel Gilbert between 1840 and 1844 revealed a record for Samuel and Sarah Smith in Richland County in March 1843 [9]. The Gilbert farm in Crawford County is just west of the Richland County line, although 21 miles from the county seat, could this be my Samuel Gilbert? I realized all three marriage records have Samuel’s signature and a quick comparison told me this was my Samuel Gilbert and in all likelihood my third great grandmother was this Sarah Smith!

Why did Samuel and Sarah marry in Richland County and not Crawford? The county seat of Crawford is just 12 miles from the Gilbert farm. Perhaps Sarah Smith lived in Richland County. I knew the surname Smith would be a challenge to research, and a quick search of the 1840 census for Richland County revealed 75 heads of households named Smith! That’s an overwhelming number of households to research without more to go on. There were far fewer Smith’s in Stark and Crawford Counties in 1840 and when narrowed down to Cranberry Township, I did find a Smith on the same page with Philip Immel, a good friend of Samuel Gilbert. However, Mr. Smith did not have daughters of the right age to be Sarah [10]. But I’ll keep his record, perhaps he is a brother or uncle. There was another Smith in the township and he did have a daughter in the right age range to be Sarah, he is a definite lead [11]. I found a Sarah Smith in Stark County, apparently, a widow, 50 to 59 years of age, and she had three women in the household who were in the age range to be my Sarah Smith [12]. 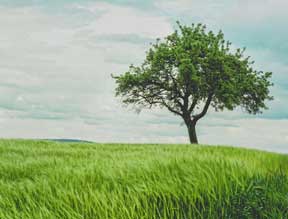 Additionally, there was a man named George Gilbert, 50 to 59, on the previous census page with a man in his household the right age range to be my Samuel Gilbert. Could these census records be leads to revealing more about Samuel and Sarah? I need more clues and so far none have presented themselves.