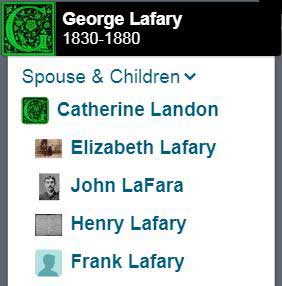 My great-great grandparents, George Lafary and Catherine Landon, had a relatively small family, three of their six children survived to adulthood [1]. However, they both came from large families where nearly all the children survived to marry and have children. Both George and Catherine had eight siblings. In both their cases they were somewhere in the middle of the birth order, and both had father’s who were in their 50’s at the time of their births. I recently had the opportunity to observe a 60+ years old father with his infant child, not his first, and it got me thinking of these two ancestors with ‘older’ fathers and large families.

My 3rd great grandfathers, the father’s of George Lafary and Catherine Landon, both married first when in their 20’s, both served in the War of 1812, both were early settlers of Brown County, Ohio and both had five children before being widowed. In the early 1800’s it was a matter of practicality to marry again, a helpmate and a mother for young children was a necessity. In both cases, these men married women a good deal their juniors, 29 and 20 years difference, respectively.

George’s father, John Lafary, was 59 years old when George was born 1830 [2] and Catherine’s father, George W. Landon, was 54 years old when she was born in 1844 [3]. John Lafary had all nine of his children from his second marriage survive to adulthood, this seems surprising for a poor farmer in the first half of the 19th century, and he was 69 when the youngest was born. Perhaps experience was a benefit, he knew how to care for young children when his 22 years old wife bore their first child in 1822. As a result, he may have been more of a helpmate to her than a younger, first-time father. Similarly, George Landon had seven of nine children from his second marriage survive to adulthood, which seems above average for the time and place, he was 65 when his youngest was born. Additionally, most of these offspring, of both men, had long lives by the standard of the day [4], many lived to over 70 years of age and some to over 80. 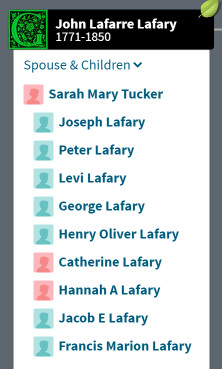 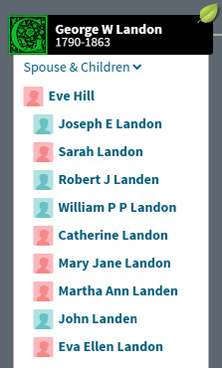 I’ve read several articles about the impact of the age of a father on their offspring.[5] It’s important to note the articles are based on research done in the past 10 years and these births in my family date back 150 to 200 years ago. The downside of having an older father is the possibility of chromosomal abnormalities with the risk increasing with the age of the father. It appears this risk is tied to DNA damage in the father from environmental factors like exposure to chemicals and toxins and also health issues such as diabetes and alcoholism. These issues seem to me to be more relevant in our modern world than the first half of the 19th century. The articles also report on benefits for children with father’s over 40 and beyond. The financial security, knowledge and social standing of older father’s in our modern world results in children, particularly boys, who do well in STEM subjects, focus on their interests and are socially secure. This in turn results in an improved socioeconomic status for the child. Something similar may have been true 175 years ago.

Reviewing my great-great grandparents and their siblings I mostly find farmers, with just a couple of exceptions who were skilled tradesmen, and of course the women did not pursue careers. I cannot claim any obvious socioeconomic benefit to my ancestors with older fathers, but it may be their skill and knowledge of farming made them better providers than younger fathers. The older father’s may have benefited, too. Both John Lafary and George Landon lived longer than the average man at the time, 79 and 72 respectively. Having a large family made for having many farm laborers, both families farmed about 60 acres, typically rye, corn and oats.[6]

I’ll never know if there was a direct benefit to having an older father in the mid-19th century, but there is an obvious benefit to me… I exist! And, by my estimation, so do another approximately 6000 people living today, give or take. A large family, indeed.