Documenting Family Oral History, One Story at a Time

When I was growing up there were family stories that were often repeated and therefore taken as fact. Since becoming interested in genealogy, I have learned that source documentation for accepted facts is very important. To that end, I have set out to find supporting sources for our family oral history. One story that was often shared was that of my paternal grandmother’s parents and how they met and married.

My great grandfather, David Louis Osborne (DLO, 1848-1942), was a widower with two young sons in 1886 when he married Marzella Warbington ( Jennie, 1857-1918) in Minneapolis on the 27th of May. The story we were told was DLO was working as a wall paper hanger in Minneapolis and had placed his sons in an orphanage and Jennie was working at that same orphanage as a teacher. They met, hit it off, got married. David was then able to take his sons from the orphanage since he had a wife to look after them while he worked. It seemed like a neat little story that illustrated some of the difficulties of the late 19th century for a widower with children and no family in the area. 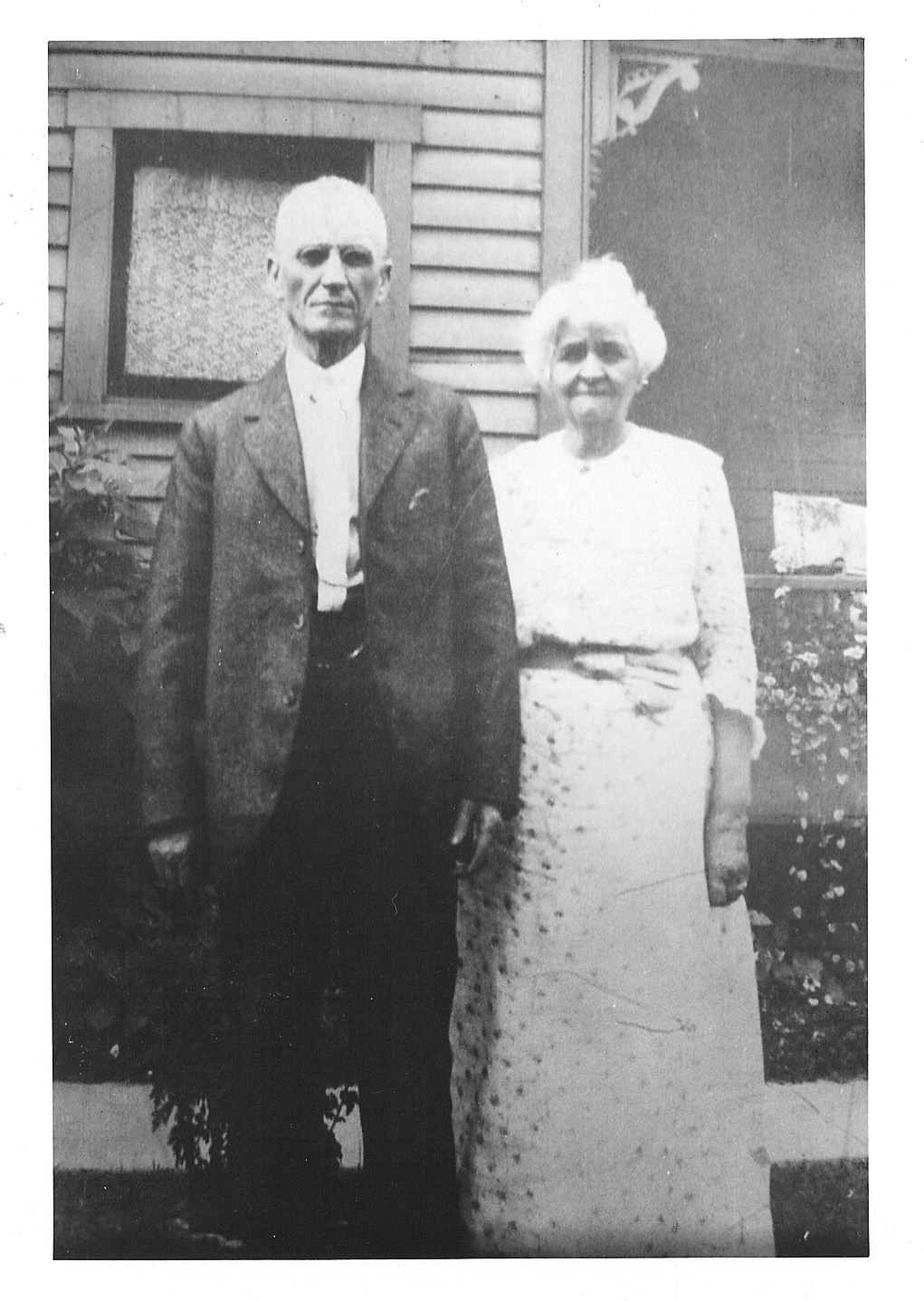 David and Jennie Osborne, 1917
I decided to start my search for sources with the most essential facts, the place and date of marriage: Minneapolis, May 27, 1886. [1] Then I decided to find the orphanage, figuring there would not be too many in Minneapolis at that time. I contacted the Minnesota Historical Society for help, they found no children named Osborne in their records for that time period, also no teacher named Warbington. But, the MNHS said they did not have archives from every orphanage in the general area. I thought perhaps if I found my great grandmother or great grandfather in the Minneapolis city directory I may be able to surmise one, or both, lived near the orphanage and I could narrow my search. I found no one named Warbington, or other similar name, in the directories. I did find David L. Osborne, paper hanger, in two Minneapolis city directories, 1886 and 1887 [2][3]. I had expected to find him in earlier directories since his first wife had died in 1883 [13]. I knew he was living in Indianapolis at the time of the death of his first wife, so when did he go to Minneapolis and place the boys in the orphanage? I checked the Indianapolis directories and found him in the 1884 and 1885 [4][5] issues. Then I looked for Warbington in the Indianapolis directories. There she was in the 1886 directory [6], Jennie Warbington – attendant Orphan Asylum. Not in Minneapolis, it was Indianapolis! (I also found her brother Joseph Warbington, with whom she was probably living when not at the Orphan Asylum, at 24 Hutchin’s Block [6].) 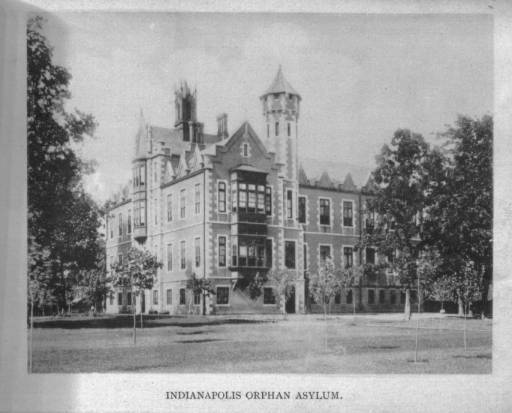 The Indianapolis Orphan Asylum (IOA) was originally located at the northeast corner of E. 13th St. and College, this location is now below the interchange for I-70 and I-65. Most of the records from the IOA are archived with the Indiana Historical Society (IHS). Using the IHS online index, I was able to identify archive BV3680, Record of Children Admitted to IOA 1885-88 [7] as a likely place to search for my great uncles, Louis and Rollin Osborne. The archives are not digitized, this is a case that required a visit to the IHS library to view the original materials. From the archived ledger I found the following:

This was a ‘wow!’ moment for me. I recognized the address of this Mrs. Miller, DLO had lived there in 1881 [8]. I checked the 1881 Indianapolis city directory and found Mrs. Miller to be Euphemia Miller, widow and landlady. Presumably, DLO had remained friends with his former landlady since, in 1885, he was living at 317 E. St. Clair [5]. But, who knows, perhaps he was back on Washington St. in June 1885. Nonetheless, it seems Mrs. Miller was helping him with his boys. Had she perhaps been caring for them since their mother died in June 1883 [13]? Another search of the records told a different story, one I had not expected. My great grandfather had been married to another woman during a portion of those intervening years. DLO married Miss X [I won’t use her name] in February 1884 [9]. Presumably, the new Mrs. Osborne was caring for the boys, but in June 1885 they were placed in the IOA. That led me to discover that in May 1885 the 24 year old Mrs. Osborne had made an initial filing for divorce [10]. In December 1885, DLO and his wife had made the final filing for divorce [11]. The final filing mentions 2 boys being in the IOA. The divorce was granted by Judge Howe on February 4, 1886 [12]. In the IOA archive [8] I found the following entry:

So my family oral history was partially true, my great grandmother did work at the orphanage where my great uncles briefly stayed. But, it was in Indianapolis, not Minneapolis. I suppose because DLO and Jennie Warbington married in Minneapolis [1] it was presumed they met there, too. In fact, they undoubtedly met at the IOA. It’s hard to say exactly when the couple went to Minneapolis, but it was sometime before the 27th of May, 1886 that they found themselves there, presumably with Louis and Rollin. Why? Well during the 1880’s Minneapolis was growing at a quick rate and I’m sure skilled tradesmen were in demand for the booming home building industry.

A closer look at the marriage certificate reveals ‘DL Osborne of the county of Hennepin in the state of Minn’ and ‘Jennie M Warbinton of the county of Indianapolis state of Indiana’. Perhaps DLO had gone to Minneapolis on his own, maybe right after the divorce? And Jennie, and perhaps the boys, went later, but before the 27th of May. The marriage was performed by the Reverend David Morgan, his church was the ME Church at the corner of 24th St. and 23rd Ave. S., which was just a couple blocks from where DLO was living (2007 22 ½ Ave. S.). Also, the witnesses were two neighbor ladies, Mrs. and Miss Graber of 2019 23rd Ave. S. This suggests to me that DLO had been in the neighborhood long enough to establish a connection to the local church and neighbors. I’ll probably never know, but I am glad to know the facts behind the story. 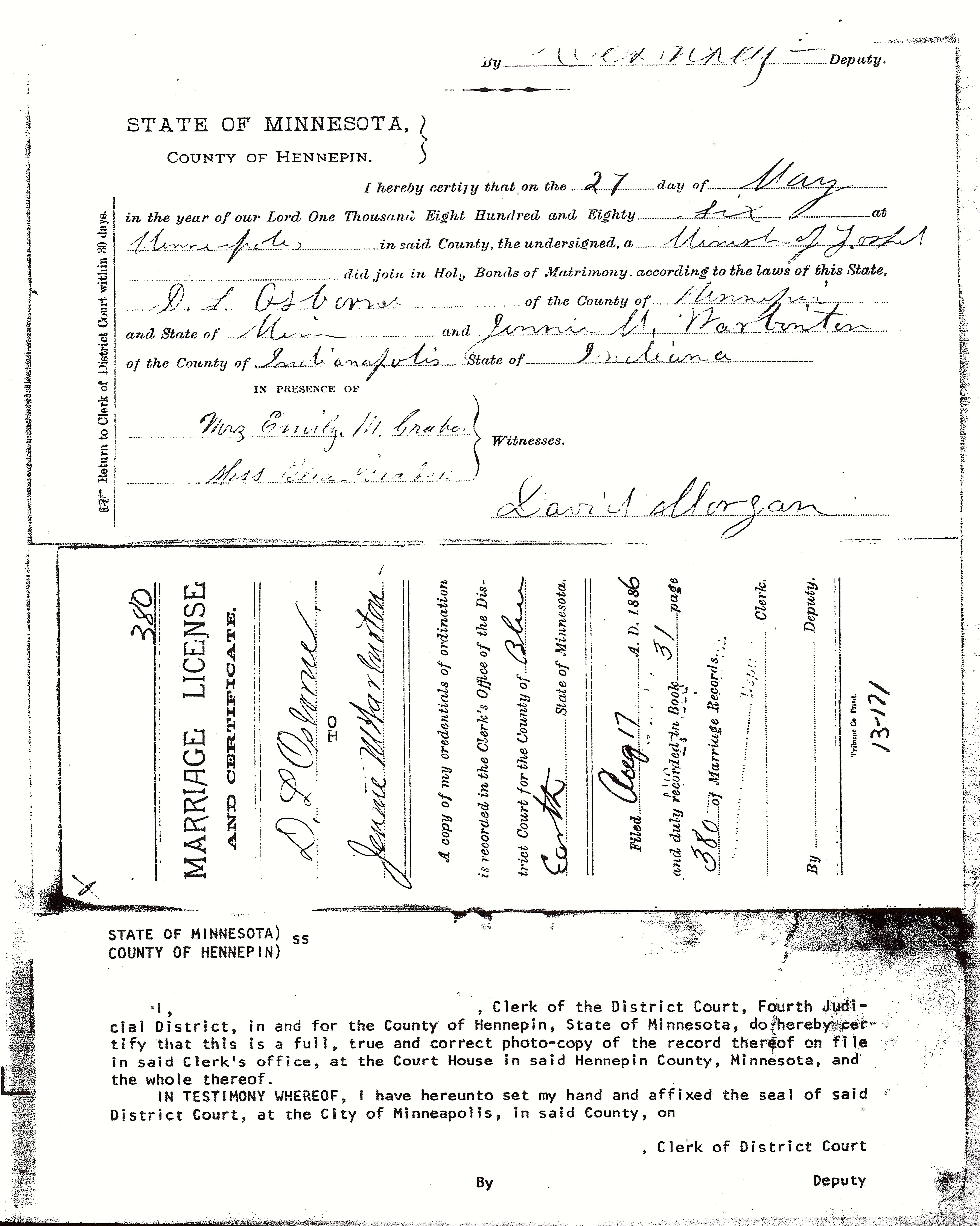 DLO and Jennie stayed in Minneapolis just a couple years, but long enough for the birth of their first child, Martha Grace Osborne was born March 14, 1887. The little house they lived in at 2007 22 ½ Ave S. is still standing! The address is now 2007 Milwaukee Ave., it’s in an Historic District and the house was rehabilitated during the 1970’s. 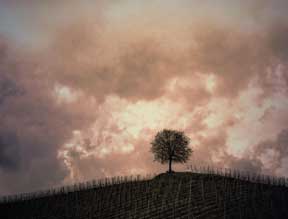 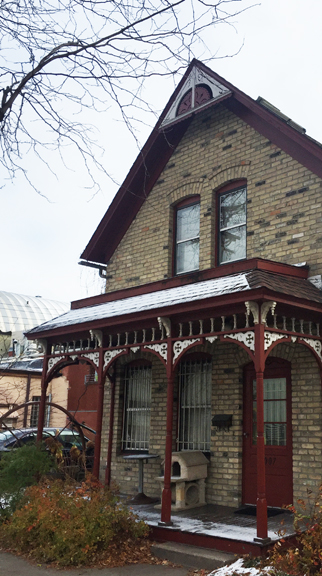 ← David L. Osborne: His Indianapolis Homes Do You See A Resemblance? →