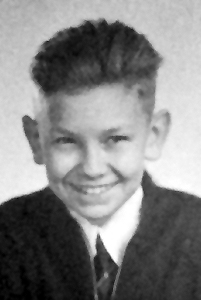 My father, Bob LaFara, grew up in the Indianapolis east-side neighborhood of Irvington during the 1930’s. The LaFara family lived in a house on South Ritter, right next door to public school #57. Recently, for the prompt “In the City,” I shared a story my father wrote about his childhood neighborhood. [1] This week, I am sharing another one of his childhood stories, “Bob’s Tires.” [2] This one is about fun and games with some old tires. It’s the sort of game a boy during the depression years could create with found items.

In the early 1990’s, my father created a website called Bob’s Crafts. In addition to craft projects, he wrote about a few of his personal stories. [3] His stories that I am sharing are from his website and they feature illustrations he created. Bob’s Crafts is still online and we have resisted redesigning it for SEO. [4]

When Bob was a boy, he had three old tires. It was fun to roll these tires around the yard. But, after doing this for some time, it began to be boring. “What else could I do with these tires”, he thought. If I had a big hill, I could roll them down the hill and see how fast and how far they would go. The only nearby hill was the sidewalk or the street and it would be too dangerous to roll them there. He didn’t know what direction they might go and they might hit a car, or a person, or roll into someone’s flower bed.

“What to do?”  Then he thought about the garage.

The garage behind the house where he lived was sort of like a double garage. There was a single car garage, and attached to it was a shed with a roof that was nearly flat. To Bob, this looked a lot like a ski jump. At the side of the shed was some backyard space that bordered on the alley. 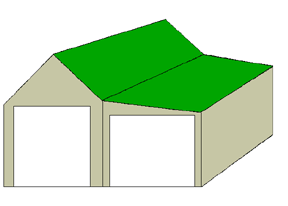 Bob thought, “Maybe if I put a tire at the top of the garage roof and let it go, it might go clear to the alley!” With this idea in mind, Bob threw the tires up on to the shed roof.

Then he climbed a tree that was next to the shed and then got on to the roof. He moved two of the tires to one side to clear a path for the other tire. Then he rolled a tire up the steep part of the garage roof almost to the very peak.

With the tire pointed in the right direction, he let it go. It zoomed down the roof picking up speed. When it hit the flatter shed roof, it bounced a little and kept on going.

It shot off of the roof and sailed out into space. It hit the ground about a third of the way to the alley; it bounced and kept on going. After bouncing a few times, it started rolling and rolled clear into the alley where it toppled over.

The other two tires performed about the same as the first one.

“This is really fun!” 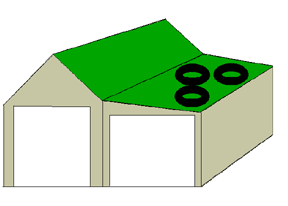 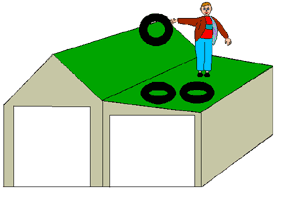 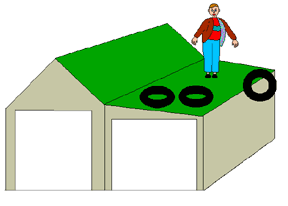 He retrieved the tires and threw them back on the roof to do it again. And he did it again, and again, and again until he was too tired to do it anymore. But he was not done. On other days, he would return and play his game again.

In those days, there were men who made a living for themselves and family by buying (or just collecting) rags, newspapers, and various items that we would call junk. The man then re-sold these items to make a profit. This is the way that re-cycling was done then. He was called the “rag man”, or “junk man”. He had a horse that pulled a wagon in which he would put the things that he picked up. He would drive along the streets and alleys shouting,

One day when he was in our alley, Bob got the idea that maybe he would rather have money than have his old tires. He asked the junk man if he wanted to buy the tires.

So, he kept on playing his game with the tires. When he got tired, he frequently just left the tires where they landed in the yard or on the edge of the alley. One day when he went to play with his tires, they were not there. They were gone!

Bob thought, “That junk man has taken my tires!” For a long time, he was convinced that the junk man had taken the tires. But in later years he thought of other, more likely, possibilities. Maybe some neighbor didn’t like seeing those tires laying along the alley where they looked unsightly and might be in the way of people walking or driving in the alley.

What do you think happened to Bob’s tires?

I hope you enjoyed this story written by my father about his childhood fun and games with some old tires. He would enjoy knowing I shared it. Read more of his stories, or try his craft projects, on his website, Bob’s Crafts. [4] I have previously written about my father for this year’s prompts “Air” and “Father”. [5, 6] I also wrote about Irvington this year for the prompt “Favorite Place”. [7]