John B. Osborn: At Worship

I have found many of my ancestors among various church records. But, the church record of my 4th great grandfather, John Baldwin Osborn, stands out. While researching this ancestor, I found he was regularly referred to as “Deacon.” This suggested a man not only at worship, but a man of character who served his church as a leader among the congregation. Amazingly, the minutes of the Deacon meetings from 200 years ago have survived and have been digitized. [1] It is a fascinating glimpse into the church life of the early 19th century, and specifically the life of one of my ancestors!

Deacon Osborn was a Baptist for about half his life. The meeting records give the date of his consideration for Baptism and enrollment in the Scotch Plains, NJ Baptist Church as 25 July 1798.[2] A few years later he was unanimously voted Deacon on 13 February 1802.[3]  Another document that has survived and been digitized is a centennial sermon from 1847 by the Rev. William Locke of the Scotch Plains Baptist Church.[4]  In this sermon, which is really a history of the church from it’s beginning, Rev. Locke provided a description of Deacon Osborn:

“John B. Osborn yet remains among us. His life has been protracted to the advanced age of ninety-three, and, until recently, has had the vigor of many men of three-score. Faithfully has he served his day and generation, and rich will be his reward in the eternal world. It has been his privilege to sit under the preaching of all the pastors of this church, and to all but Mr. Miller, he has been an associate and dear friend. He is one of the surviving few, who, under Washington, the father of his country, bravely bearded the British Lion, and rescued their country from his greedy grasp. His course of life, humble and unassuming, has not been calculated to call down upon him the gaze of an admiring world; but by his judicious and peaceful walk, he has ever exerted a happy influence in the church; and, though he is yet among us, with the pious companion of his youth, we dare venture to express the confidence that his name will occupy a high position in the records of the Book of Life.” [5] 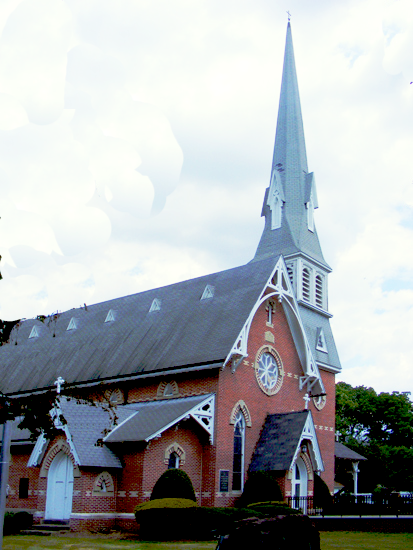 Scotch Plains Baptist Church – This is the present building, most dating from about 1870. The original building burned in 1817, the second in 1869.

It was satisfying to discover this account of my ancestor. But, to me, it is the daily activities of an ancestor that are most interesting. Many of the entries in “The Records of the Baptist Church…” are just that, everyday accounts of a congregation. For instance, an entry from the meeting of 30 May 1810,

“Deacons Osborn and Brown reported that they had waited on bro. Stephen Corwin as a Committee for that purpose and conversd with him respecting his disorderly conduct, he having promised reformation, it did not appear that he had reformed but had been guilty of repeated instances of Excess in Drinking and bad language, on which the Church proceeded to his case and unanimusly agreed to Exclude him from the Church.”[6]

From reading the minutes, the transgressions of members of the congregation was a typical issue discussed at church meetings. A deacon was assigned to investigate and report back their findings. The members at the meeting would then decide the fate of the transgressor, often it was “dismissal” or “exclusion.” At the 31 January 1816 meeting,

“The Church met as Usual for business. Prayer by our Pastor agreed that Brethren Deacon Osborn, Jotham Frazy, J H Osborn to be a committee to wait on and Enquire into the conduct of our Sister Phillis a woman of Coulour now belonging Jacob Stanbury respecting a Slanderous report against her and report at our next meeting of business.”[7]

There is no follow-up to this matter captured in the meeting minutes. This is not unusual, many of the concerns raised at one meeting have no resolution documented. Did these concerns go unresolved, or were the results not worth mentioning? Consider the following items, the first from 9 August 1817,

“Saturday – the committee appointed to wait on Bro. D. Ayers reported that the matter in difference between him and Bro. John Manning was Settled. But the Church not being Satisfied with the conduct of Bro. Ayers appointed Deacons Osborn & Ball Cite him before Church and report at our next meeting of business.”[8]

The follow up on 11 October 1817 seems trivial but yet was included in the minutes,

“Saturday meeting – Resumed the business of bro D. Ayers – He acknowledge that he had ungardedly Expressed words for which he was Sorry and was Sorry he had wounded the feelings of his brethren.”[9]

The transcription quoted here contains nearly 180 pages of meeting minutes between 1747 and 1837, four to six meetings per year, the minutes are brief. Were the meetings also brief? My ancestor was Deacon from 1802 to his death in 1848 and is mentioned in most the meetings contained in this transcript. I wonder if members dreaded seeing him at their doors. Was he kindly or lecturing? It’s fascinating to know of his everyday activities, as it relates to his religious life. I like to imagine Deacon Osborn calling on his fellow congregants, putting forward the concerns of the church, in a kindly way, and gently encouraging repentance and contrition. Probably a lot of prayers were involved.

It was not only the Deacons of the church attending these meetings. The Pastor, Elders, brothers and sisters are often mentioned among the attendees. I found the following particularly interesting, at the meeting of 29 November 1826,

and in the margin is written,

“Members not to tattle.”