John Rogers is one of my 12th great grandparents, of which we all have 16,384. That’s 8,192 couples. That’s 14 generations, 400 to 450 years between ancestor and descendant. The fact I know the name of even one of these ancestors is amazing to me, so it’s particularly amazing that I know the names of about 30 of my 12th great grandparents, and will probably know more as I continue my research.

Finding these individuals who lived so long ago, and connecting them to a family tree, usually means the person was of some consequence, or infamy, to be recorded during their life and the record preserved after their death. This is the case of John Rogers, The Martyr. Spoiler, the moniker after his name gives a clue to why his record has been preserved.

John Rogers was born in 1506 to a tradesman class family near Birmingham, England. John had the good fortune to study at Cambridge University and is listed among the graduates in 1526. John took Holy orders as a Catholic priest and served briefly as Rector at Holy Trinity Church in London. This was at the time of the Protestant Reformation and John was among it’s early converts. He left the church, and England, and went to Antwerp, Holland about 1534 as a reformist minister for the English ‘Merchant Adventurers in Holland.’ [1] 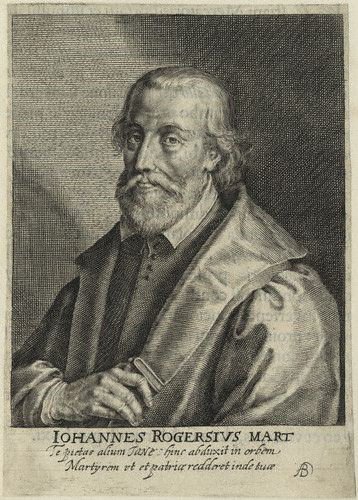 While in Holland, John Rogers became a student of William Tyndale, an early translator of the Bible. After Tyndale was executed as a heretic back in England in 1536, John Rogers continued the work and completed the translation of the Bible to English. About 1537 the first complete English language version of the Bible was published under the pseudonym Thomas Matthew and is often referred to as the Matthew Bible. It is the basis for every English language version since. This was a monumental, and controversial, accomplishment of the time.[2]

John Rogers married Adrianna de Weyden Pratt during his time in Antwerp and they would go on to have 10 children, all surviving to adulthood. Also during this period, King Henry VIII of England dissolved the Catholic Church in England and introduced Protestantism. An English language Bible was exactly what he needed to advance his plan. The Matthew Bible was given a royal ‘license’ and promoted and widely used in England.[3]

By 1540, John Rogers and family are in Wittenburg, Germany, the center of the Reformation and home of Martin Luther, the leading figure in the Reform movement. John Rogers must have known, or at a minimum crossed paths with, Martin Luther. His time in Germany was spent in study, ministering and more religious translations.[4]

In 1548 John Rogers and his family removed to London, where the head of state was the very young King Edward VI. John continued making translations and was awarded with ministerial appointments at several churches. The young king died in July 1553 and his half-sister Mary, a non-reformed Catholic, became Queen of England. Soon after began the persecution of reformists, such as John Rogers.[5]

As a result of John publicly preaching against the return to ‘Popery’, he was placed under house arrest in August 1553 and in Newgate Prison in January 1554. John remained in prison, along with several others, for a year before getting a hearing. It was to no avail and John Rogers was sentenced to death on 28 January 1555 for heresy. His last wish was to have a meeting with his wife, but it was denied. On 5 February 1555, John Rogers was walked through the London suburb of Smithfield, where his wife and 10 children waited for him in order to make their farewells. John Rogers was then publicly burned at the stake as the first of several religious Reformation ‘martyrs’ during the reign of Queen Mary.[6]

My 12th great grandfather, John Rogers, The Martyr, was an educated man, a religious man, an accomplished man, and a man of conviction. He, and his wife, were also prolific and I am a beneficiary of (at least) that trait. The descendants of John Rogers include several historically relevant American’s: founders, explorers, military figures, scholars, and politicians. I estimate John Rogers has over a million living descendants today. Are you one?

← George Lafary and Catherine Landon: Large Family In The Paper →