My Experience with DNA

My Experience with DNA

I tested my DNA with Ancestry.com DNA back in 2013. My expectations were high. I presumed the results would tell me more about my ancestors origins and put me in touch with cousins also interested in family research. But, for me, the DNA test results have been somewhat interesting, but not particularly useful.

My Ancestry.com DNA ethnicity results originally indicated my DNA is about 86% British Isles. This was a bit disappointing since about half my immigrant ancestors came from Germany. But, that’s how DNA works. Over the years Ancestry has modified their ethnicity calculator and I am now a combined 95% “England, Wales and Northwestern Europe” and “Ireland & Scotland.” This is more satisfying to me since “Northwestern Europe” per Ancestry’s definition includes Germany, France and Switzerland. Plus, I now have a 2% “Germanic Europe.”

I also transferred my Ancestry raw DNA file to GEDmatch and Family Tree DNA (FTDNA no longer offers this option) and it was interesting to see the different results versus Ancestry. At FTDNA I was 58% “Western and Central European” and 12% “British Isles.” Now I am 64% “Western and Central European” and 33% “British Isles” at FTDNA. Again, the updated report is closer to my known ancestry. Gedmatch reporting indicates a combined 60% for “North Sea” and “Atlantic,” which is roughly British Isles and western Europe. The tiny trace amounts of American Indian and Oceanic reported by GEDmatch are interesting, but probably meaningless.

Why the difference between the three companies? You need to read each company’s white papers to learn how they collect and use regional DNA data, and self reporting of genealogy by the participants, to develop their comparison profiles to determine geographic heritage for testers. Bottom line, differences between testing companies exist and that is why DNA testing to determine ancestral geographic origins should be viewed skeptically and backed up with a document trail. 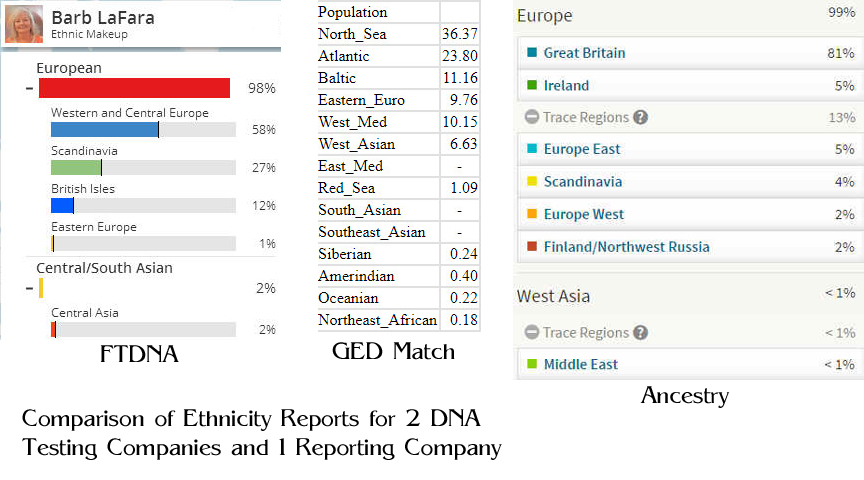 I continue to read articles about using DNA for genealogy and I regularly check for new matches. You never know when a match may help break down a brick wall or lead to some new discovery about an ancestor. But, it seems a good deal depends on the quality of research performed by those I match. I currently have over 58,000 matches on Ancestry.com, 1700+ are considered “close,” that’s 4th cousin, or closer. It’s overwhelming to try and look at this many matches, so I focus on those with the most shared DNA (centiMorgans) and that have linked trees of more than 50 ancestors.

Ancestry has a new DNA comparison feature called “ThruLines” that I hope will help me break down my brick walls, I’ll blog if does. But, again, a lot depends on the research performed by other participants. If you tested with Ancestry, please link your tree and keep adding to it regularly! In the meantime, if I am one of your matches, I am happy to help break down your brick walls.