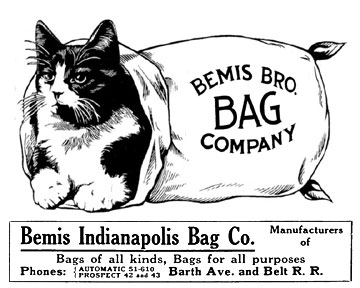 Nearly all my ancestors can be found in the records working. For the most part, the men were farmers, the women were keeping house. The few exceptions included a weaver, a preacher and a lime burner. More recently my ancestors have worked in cities, including a paper hanger, a postal clerk and a research scientist. The ancestor who stands out is one who made the transition, as an adult, from rural farmer to city worker. My great grandfather John LaFara, 1864-1945, was a farmer in Tipton County, Indiana but sold his farm and moved to the city to work as a laborer. [1]

My great grandfather, John LaFara, was born 7 Feb 1864 to George and Catherine (Landon) Lafary near Georgetown, Brown County, OH. He was their second child, their first being Elizabeth born in 1862. I previously wrote about George and Catherine for the prompt Large Family in 2019. [2] The family relocated to Ripley County, IN by May of 1865 as evidenced by Catherine being a witness in Orphan Court on behalf of a child seeking a veteran’s pension claim. [3] Besides George, Catherine, and their children, the household included George’s 65-year-old mother Sarah and his two younger brothers, Jacob and Francis. 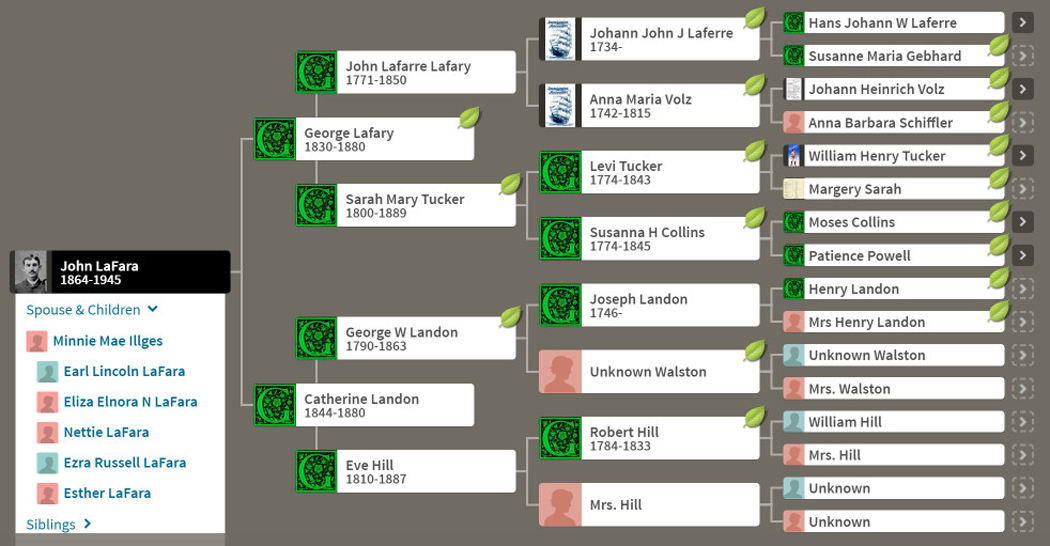 When John’s mother remarries, and his sister Lizzy marries, both in 1882, John is able to work and save toward owning a farm himself. John bought a farm just east of the city of Tipton in Cicero Twp., Tipton County, IN. There he met and married Minnie Illges on 24 October, 1887. [7] Minnie was the daughter of a very successful farmer herself. [8] John and Minnie went on farming and had 5 children. Shortly after the birth of their youngest child in 1903, John sold his farm and moved his family into the city of Tipton. After more than 25 years working as a farm laborer, this is when John leaves farming and becomes a common laborer. 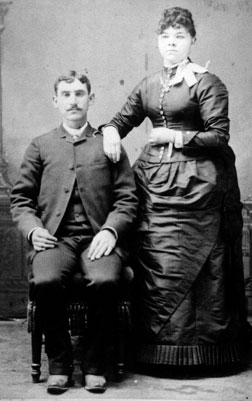 Working in the City

I am not entirely certain of the jobs my great grandfather worked at while in Tipton. Although, in 1911 he was working at a “light plant” when he fell from a ladder. [9] His accident was reported in the Tipton Tribune and they stated he broke several bones in his face! In 1912 John moved the family to Indianapolis where his eldest child, my grandfather Earl, was already working as a clerk for the US Postal Service. Tracking John’s work record in Indianapolis is a little easier thanks to the city directories and federal census.

Several of the jobs John held could be interpreted multiple ways. Was John a fireman like we think of today? Putting out fires. Or, did he shovel coal for a boiler? That job was also called a fireman. The latter seems more likely to me. When John worked as a porter, I don’t think he carried bags at a hotel or station. Rather, he probably loaded cartons of bags onto a truck. I know from census records and his obituary that John worked for the Bemis Bag Company for 20 years. (See the Epilogue below for more information about Bemis.) It seems probable he worked manual labor jobs at Bemis that required strength and stamina from 1919 to 1939.

John LaFara,
his occupations in Indianapolis 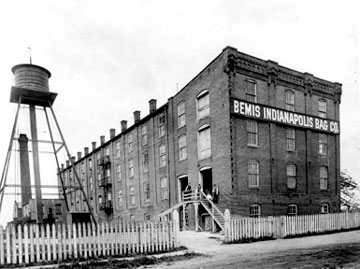 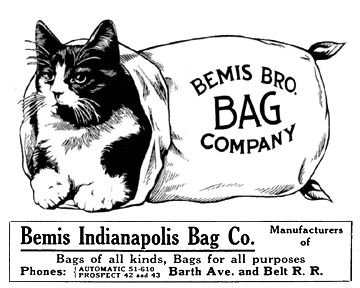 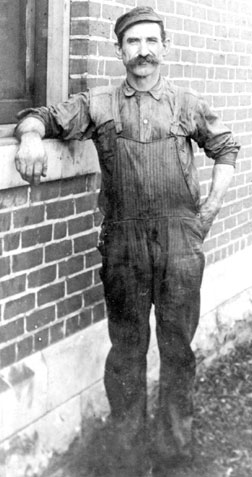 In the 1940 census, when John was 76, he lists his occupation as peddler in the candy trade. [18] I wonder if this means he sold Cracker Jack at the ball park. Or, maybe he had a small booth at the farmer’s market where he made and sold taffy or caramel apples. I do not know how long John continued in the candy trade, but I do know he cared for a backyard vegetable garden at his little home on W. Southern. With the exception of the engagement photo, the few photos I have of my great grandfather he is wearing work clothes. Always working. 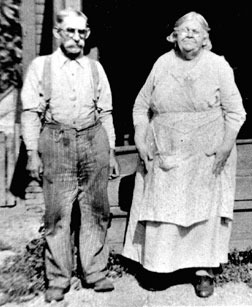 My father told a story about the day he took this photo of his grandparents. It was Spring 1943 and he had gone to their home on W. Southern to tell them he had enlisted in the Army. He also told them he wanted to take their photograph. His grandfather, John, had been tilling his vegetable garden, and wanted to put on a clean shirt. My father said when his grandfather took off the dirty shirt, he was surprised at how well muscled his grandfather was considering he had recently turned 79 years old. Probably a reflection of a life of physical labor.

My great grandfather John LaFara was a worker, for sure. It’s hard for me to imagine working a farm before the benefit of ICE-tractors. And it’s completely alien to me to do the sort of daily manual labor of feeding a boiler or moving heavy boxes. John lived a relatively long life, he died in 1945 less than a month before his 81st birthday. He had broken his leg and while laid up contracted pneumonia which was complicated by his arteriosclerosis. He also had prostrate cancer. [19] All of which are more treatable today. 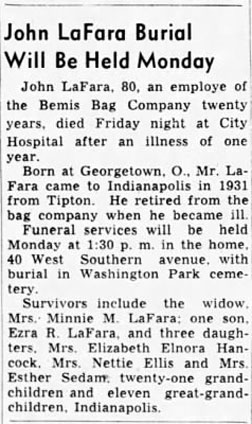 Bemis Brothers Bag Co. was at 1940 S Barth Ave. This address is south of Beecher, north of LeGrange, where the old Belt RR ran. There are apartments there now. Bemis made various cloth bags, cotton, and burlap, for the food industry. John’s son Ezra (my great uncle) also worked at Bemis. It was not far from their home on W. Southern. Bemis was a national company founded in 1858 and was acquired by Amcor in 2019. Amcor is a global company that makes packaging for food products. Although, now it is plastic, rigid containers.