Among the documents and photos I have inherited are several relating to my great grandfathers’ service during the American Civil War. My great grandfather’s war service was just about 3 years of his long life, but yet it became an important part of who he was. In his later years, once his family demands were less, he regularly participated in reunions and was active in his GAR (Grand Army of the Republic) post. After the death of his wife in 1918, until his death in 1942, my great grandfather lived with my father’s family and many of the stories he told have been passed to me.

David Louis Osborne (1847-1942), was born in Carthage, Ohio to William Osborn and Harriett McCash[1]. David was the youngest of five children born to William and Harriett and one of just three who survived to adulthood. Carthage was a small village on the northeast side of Cincinnati, David’s father was a wagon maker and carpenter with a workshop in the village. David’s maternal grandfather, James McCash, was a local landowner and farmer. 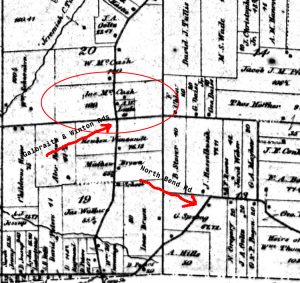 William and Harriett Osborn divorced in 1855, divorce was fairly uncommon during the time period and it negatively impacted the relationships David had with his parents for the rest of his life. William Osborn never remarried and typically reported himself as a ‘widower’ on the census. Harriett McCash Osborn remarried in 1856 to a local farmer, and widower, named Barnabus Hoel [2] and had one child with him. David lived with the Hoel’s and was reported as ‘David Hoel’ in the 1860 census [3], his two older sisters (Sarah 1840-1912, Clara 1844-1933) were married.  Barnabus Hoel died in 1861, and David, his mother and half-brother went to live with his sister Clara and her husband Amos Little (1827-1894) on the Little’s farm which adjoined the farm of James McCash [4]. 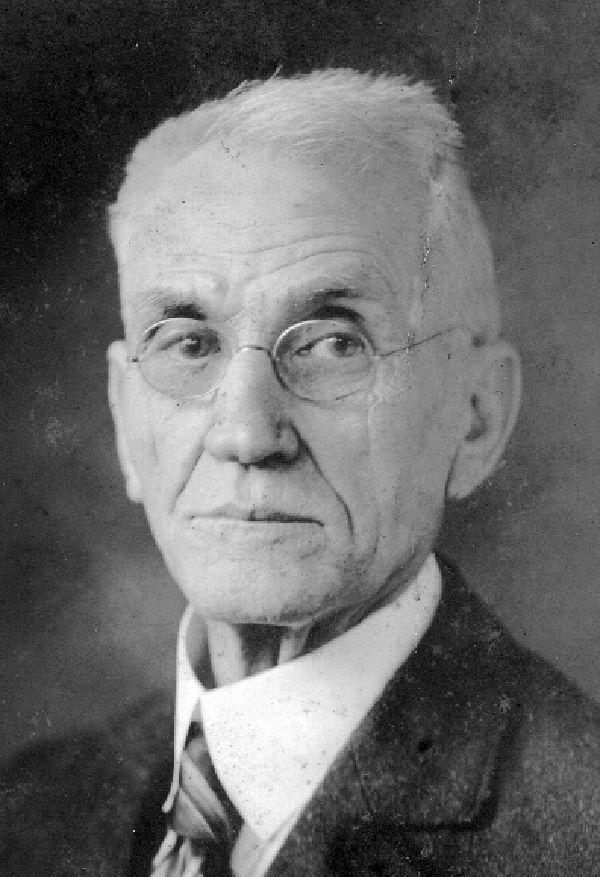 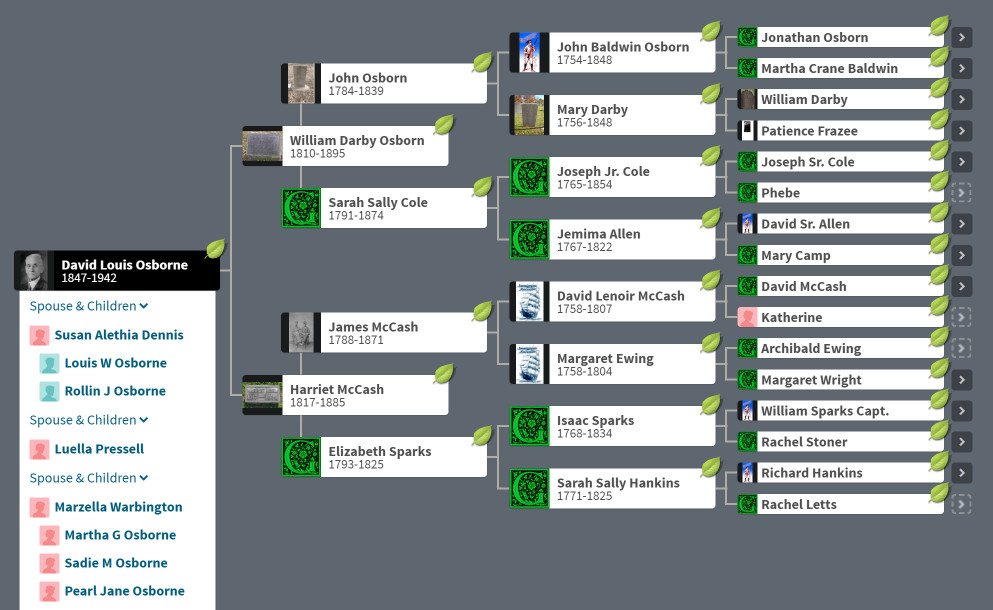 Family tree of David Louis Osborne, based on my research, as of October 2018
Unbeknownst to Harriet McCash, her second husband, Barnabus Hoel, was a 3rd cousin to her first husband’s maternal grandmother, Jemima Allen. That means my great-grandfather’s half-brother, Isaac Hoel, was also his 4th cousin 2x removed.

It appears the Civil War presented David with an opportunity to get away from his mother, this is part of the story David would tell as an adult when discussing his enlistment. He would say about his mother, “She was the meanest mother a boy could have.” David enlisted in August 1862, he was just 14 years old and lied about his age, stating he was 18 [5], then 3 years later on his discharge paper he stated 16. He would say he lied about his age in order to avoid being a drummer, and he also told my father, “… it was a great adventure for a boy” and he enjoyed it, “except for the fighting.”

This data was transcribed from the ‘History of the Eighty-Third Ohio Volunteer Infantry, The Greyhound Regiment‘ by T. B. Marshall of Sidney, OH and First Sargeant of Co. K, 83rd OVI. Published in 1912 by the 83rd OVI Association[6].

Grand Coteau, LA: November. 3, 1863
This is where David Osborne was taken prisoner

Major Battles of the 83rd Ohio Volunteer Infantry during the Civil War, 1862-1865 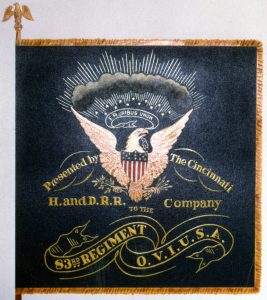 After reporting to Camp Dennison (east of Carthage, OH), David was made a private with the 83rd Ohio Volunteer Infantry (OVI) and almost immediately the regiment was ordered to Covington, KY to assist in repelling a possible Confederate attack of Cincinnati[6] on 3 September 1862. There was no attack and the regiment spent nearly 3 months (until 22 November 1862) training for further deployment. It was at the end of this period the regiment received the nickname by which they would forever be associated: Greyhounds. On their last march, going to Louisville, they covered the final 16 miles in 3 hours and 50 minutes. This was cause for the rest of the brigade to curse them for being ‘greyhounds’[6]. In total, they marched nearly 300 miles during this training time. Upon reporting to Louisville they embarked on steamers to Memphis, taking 10 days via the Ohio and Mississippi Rivers[6]. David told my father many soldiers became sick from the food and water at Memphis, so he mostly ate raw onions to avoid being sick, too.

On 21 December 1862, the 83rd OVI, along with the rest of the Western Army of 30,000 men on about 100 steamers, shipped south towards Vicksburg, MS. On the third day, they arrived at Milliken’s Bend, where the 83rd was ordered to arrange 2 days rations and light marching equipage for an assault on a railroad bridge used to send supplies from Texas to the Confederacy. It was Christmas Day 1862 when the 83rd set out to cover 26 miles to their objective, it took about 10 hours. After destroying the bridge, the warehouse, rails and ties, the 83rd now had to make their way back to their ship. Another 26 miles, the very next day, and proof they deserved the name ‘Greyhounds’[6]. David would say of this adventure, “…it was fine for a boy, but many of the older men could not keep up” and “…some of the men got back just as the steamer was about to leave.” That would have been on the morning of 27 Dec 1862. 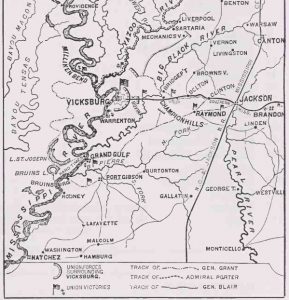 The 83rd went by boat north on the Yazoo River to a place called Chickasaw Bayou where they engaged in their first battle[6]. This is where the regiment spent the end of 1862. The first 10 days of 1863 found the 83rd traveling by steamer nearly half way back to Memphis. They disembarked at a place on the Arkansas River called Arkansas Post where they engaged in their second battle and captured the fort, Ft. Hindman[6]. The regiment returned south where they spent the next few months patrolling along the Mississippi River until they reported to Grand Gulf, MS, south of Vicksburg, on 29 April 1863. From there they engaged in battle nearby at Port Gibson, MS on 1 May 1863. The remainder of the spring and summer of 1863 were spent in the vicinity of Vicksburg, MS. Although there were some battles and skirmishes during this period, most of the time was spent participating in the siege of Vicksburg and then Jackson, MS[6]. 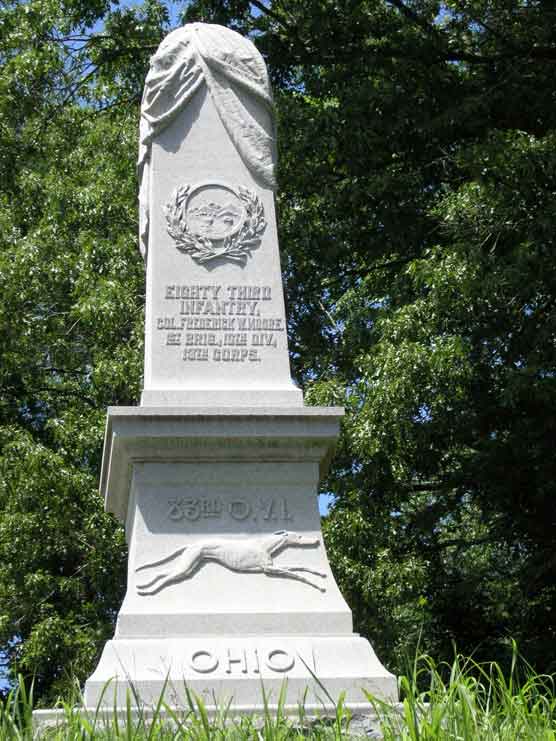 The 83rd OVI spent the first 2 months of 1864 on the north side of Lake Pontchartrain at Madisonville, performing patrols all around the lake. From there, they made their way to Alexandria, LA by train, steamer and foot. A total distance traveled of nearly 300 miles, when marching they averaged about 18 miles a day. During this period, spring 1864, the 83rd OVI was part of the Red River Campaign and went as far as the Sabine River (the border of Texas with Louisiana) to participate in the Battle of Sabine Crossroads. They also built a dam on the Red River at Alexandria and were in a skirmish at the Governor’s plantation. By the end of May 1864, the 83rd were in Morganza, LA boarding a steamer for Baton Rouge. They spent nearly two months at Baton Rouge on guard duty and patrols and then returned northward by steamer back to Morganza where they based their duties until November, mostly patrolling and two skirmishes at Atchafalaya, LA.[6]

November 1 of 1864 found the 83rd steaming north to White River, AR, 450 miles from Morganza, LA, where they spent a month guarding the mouth of the river. Returning south to Natchez, MS the 83rd remained on guard and patrol duties through the end of 1864. The end of January 1865 found the 83rd OVI steaming towards New Orleans and then onto Barrancas (Beach), FL, nearly 500 miles. After a month of guard duty, the regiment marched to Blakely, AL, but slowly. They took a month to cover 60 miles, there they engaged in their final battle and captured Fort Blakely on 9 April 1865.[6]

With the war officially over, the 83rd was part of the ‘capture’ of Mobile, AL on April 12. From Mobile, they took a steamer up the Alabama River to Selma where they helped secure that city and Montgomery, AL. The regiment remained on guard duty in Alabama until June 13, 1865 when they steamed to Galveston, TX where they mustered out 24 July 1865. Finally, the last boat ride… Galveston to Cairo IL, 1500 miles and then overland by train to Cincinnati and official discharge on 10 August 1865.[6] 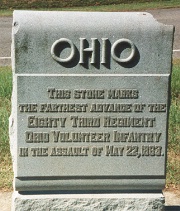 These monuments can be seen at Vicksburg National Military Park, they recognize the 83rd Ohio’s advancement during battle and their participation in the siege

By the end of August 1863, the 83rd OVI went by steamer south to New Orleans where they spent the remainder of the year participating in the Western Louisiana Campaign including a battle near Grand Coteau, LA[6]. It was during this battle that David was taken a prisoner of war. David told a story of his imprisonment to my father saying, “…we had the run of the town and slept in a barn.” and “…we got chickens and sweet potatoes from the towns folk.”  David was a POW for about 50 days and was paroled with other Union soldiers on 25 December 1863. He returned to his regiment that was now at Ft. Jackson at the southern end of Louisiana. There is a stamp on David’s discharge papers regarding compensation for his imprisonment. 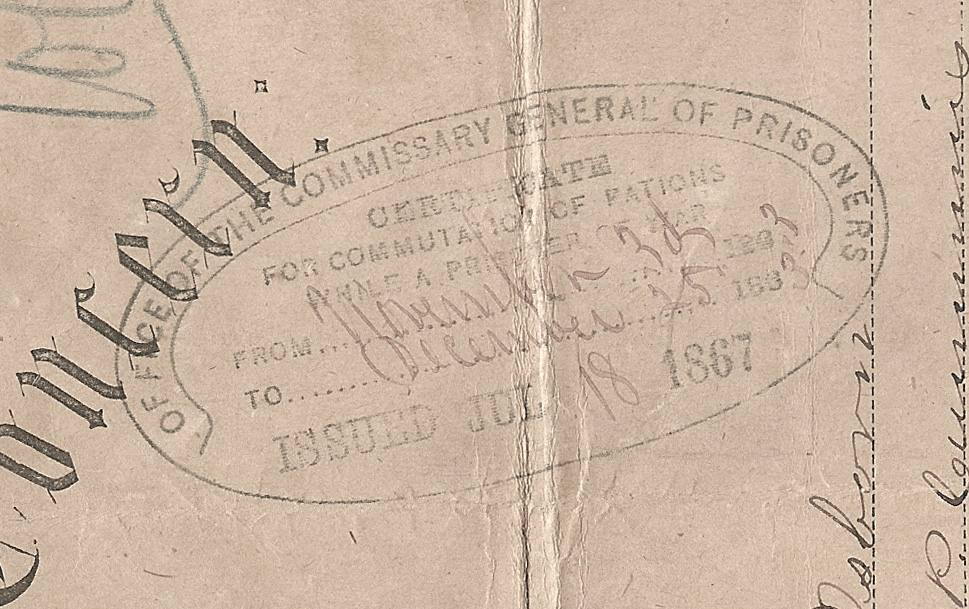 The stamp orders a commutation for rations, 3 Nov to 25 Dec 1863, from the Office of Commissary General for Prisoners 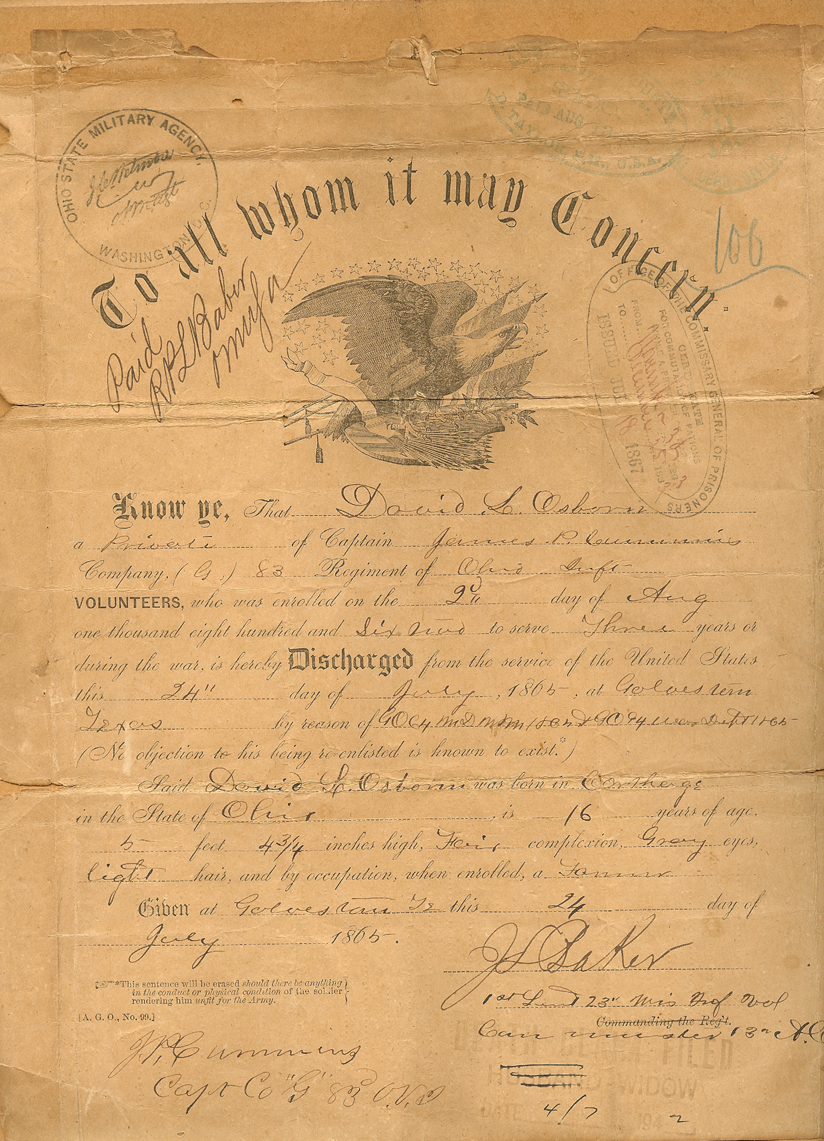 David Osborne’s discharge document, this hung in a plain picture frame in my father’s boyhood home

I think of an ‘Infantry’ as being an army of foot, marching everywhere. But in fact the 83rd OVI, over a 3 year period, marched under 2000 miles but went by steam boat about 7000!

There are two more stories that stand out for me, but I am not sure how they fit with the history of the 83rd OVI. David told a story of being challenged to swim across a river. But which river I do not know. As a child, I tried to imagine swimming the Mississippi River, but that seemed hard to believe. Now that I am familiar with the travels of the 83rd, I think the river he tried to swim must have been one of the smaller one’s they traveled, perhaps the Yazoo, Red or Sabine Rivers. The story was, he started swimming and about half way across something large rubbed up against him and he decided to turn back. The next morning the men observed a Confederate camp across the river, so just as well the swim was aborted.

The second story was about herding cattle, on a ship, from Florida, (or was it Texas?), to Union troops along the Gulf Coast, near the end of the war. I have read about the round up of feral, Spanish cattle in Florida for sale to the Union, but I have no way of knowing if David was referring to that bit of history. Certainly cattle in Texas were sent east, but would that involve the use of boats? In either case, it sounded like a great adventure for a teenager.

After the war, David went to live with his sister and brother-in-law, Sarah and BF Roseboom, near Lebanon, Indiana. He developed skills for being a ‘finisher’ for the booming housing market, mostly painting and wall papering. He soon moved to Indianapolis where the boom was in full swing, he painted and wall papered many homes in the near north- and east-side ‘suburbs’. David married three times: widowed, divorced and widowed again. He had two sons with his first wife and three daughters with his third wife, seven grandchildren and five great grandchildren before his death in 1942.[8] At the time of his death, David was the second to last Civil War veteran living in Marion County, Indiana.

We use cookies to ensure that we give you the best experience on our website. If you continue to use this site we will assume that you are happy with it.Ok