While researching family history I often find tragic stories of ancestors that make me realize how lucky I am to exist. One such story involves a maternal 3rd great grandfather named Anderson T. Dyer. The story goes that he died as the result of a fall from his horse. He lingered for a few days and was able to give his last will orally. The piece of luck, for me, is that his wife was several weeks pregnant with my 2nd great-grandfather at the time of his death.[1]

Anderson T. Dyer was born 11 July 1814 in Grainger County, TN to parents James Monroe Dyer (1774-1857) and Elizabeth Garroth (1780-1835) Dyer. Anderson married Rachel Hubbs, the daughter of his neighbor William Hubbs, in 1842. [2] From the information in the 1840 census, I have surmised that Rachel was living with her father [3] and Anderson, with his children, were living with his father James Dyer Sr.[4] This means Anderson had a marriage before Rachel. I have not found the documentation, but I believe his first wife, the mother of his 3 eldest sons, was named Sarah Criffen.[5] 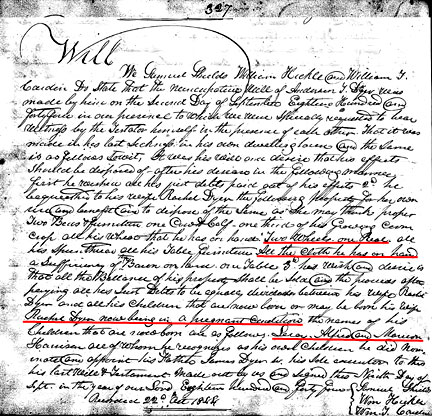 Anderson’s will was orally made and witnessed 2 Sep 1844 during his “last sickness in his own dwelling house.” In this will he gives his heirs as his wife and all of his children “now born or may be born, his wife Rachel now being in a pregnant condition.” The will was signed by the witnesses on 9 Sep 1844, presumably Anderson had died.[6]  In addition to Rachel, he named his living children as Leroy, Alfred and Marion. His youngest son, my ancestor, James A. Dyer, was born 25 Apr 1845. That’s about 33 weeks after Anderson’s death.

Anderson may have been a spinner, in addition to being a farmer. His will includes a bequest to his wife Rachel of “Two wheels, one reel, all his spun thread and all the cloth he has on hand.” No mention of a loom, but his estate inventory includes flax, cotton and sheep.

Anderson’s sons Marion and James both served the Union during the American Civil War. James, my 2nd great-grandfather, married after the war to Mary Shaver. Their eldest son John A. Dyer was my great grandfather, he was born 13 Sep 1867. According to the 1890 Veterans Schedule, James Dyer suffered from neuralgia. [7] Although, when he died in 1915 his cause of death was a chronic kidney condition. 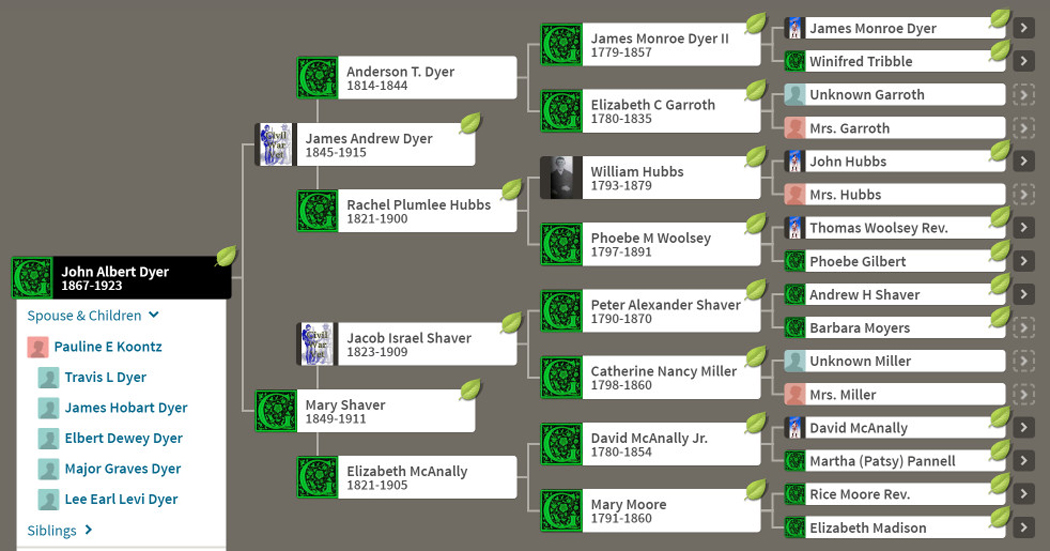