Luck and the 1918 Influenza Pandemic

Living as we are during a time of a global pandemic, got me thinking about the 1918 influenza pandemic and how it may have affected members of my family. I wondered how my ancestors might have avoided becoming infected with the 1918 influenza. Would it be luck? After all, in 1918, there was no vaccine, no blood tests for infection, no antigen testing. And if they did get sick, there were no respirators, no blood transfusions, no knowledge of plasma. Did they rely on luck?

My maternal family were mostly farmers in 1918 and lived in rural areas where social distancing was a way of life. [1] They typically would socialize only on Sundays. I determined their lifestyle gave them some protection. From my previous research, I knew that two of my maternal great uncles were in military service during WW1. I decided to take a closer look at their service records to discover if either had the 1918 influenza. I did not find definitive evidence of infection in their records, but I did discover evidence my great uncle Oscar King was exposed to influenza. Maybe he was lucky and escaped the infection. See the paragraph below for “Oscar King 1918.”

My paternal family lived in Indianapolis, Indiana in 1918. [1] One of my paternal great aunts served as a deaconess and a policewoman during 1918. Both these careers would have exposed her to many people in the community and therefore increase her risk of contracting influenza. Was she lucky enough to escape the infection? She probably did not believe in luck, perhaps providence intervened in her case.

My great aunt Sadie Osborne (1888 – 1940) graduated from the National Training School for Deaconess’ in 1910. [2] A deaconess was a woman who ministered to the community through good works. Sadie worked among the poor in Indianapolis, providing training to improve their sanitary conditions. [3] She also worked with the Traveler’s Aid organization at Union Station and the Traction Barn assisting women traveling alone. Her work and position in the community led to her appointment in May 1918 as one of the first policewomen in Indianapolis. [4] 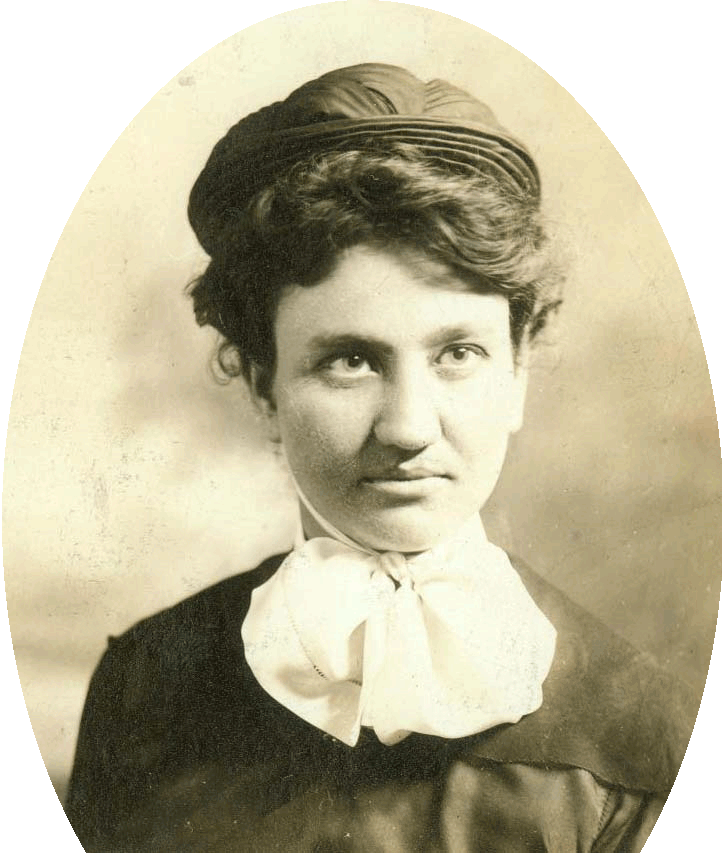 I have no written documentation or family oral history to indicate that Sadie had influenza during 1918. But, I did find two newspaper articles indicating Sadie was exposed to influenza. First, an article from October 19, 1918 [5] describes Sadie caring for two families stricken with influenza. Second, an article from November 2, 1918 [6] reports Sadie cared for a family of 16(!) suffering from influenza. In both cases, Sadie was acting in her role as a policewoman until medical aid could arrive on the scene. Was Sadie lucky and avoided contracting influenza herself? I will never know, but it appears Sadie was definitely exposed. I propose that Sadie’s training in hygiene and nursing improved her chances of avoiding contagion.

My great uncle Oscar King (1897-1982) was inducted into the Army on March 17, 1917. [7] He did his training at Camp Doniphan outside Fort Sill in Oklahoma. His unit, Battery “A”, 81st Field Artillery, was part of the Eighth Division. I found no medical report specifically for Camp Doniphan, but this comes from a general account of the camp. [8]

Camp Doniphan had a large number of admissions in 1917 and the spring of 1918, which were attributed to influenza, the greatest number being 714 in April, 1918. Very few such cases were admitted during the summer of 1918, but an increase occurred in September. The main force of the epidemic in the fall of 1918 was expended in October, although several hundred cases occurred in November and an even greater number in December. There was a total of 5,088 cases of influenza admitted to sick report during the year 1918, but only 2,752 of these occurred during the fall epidemic. 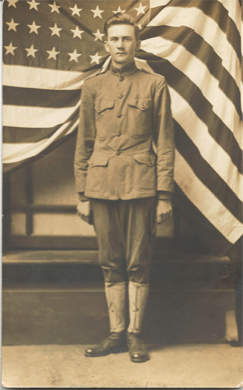 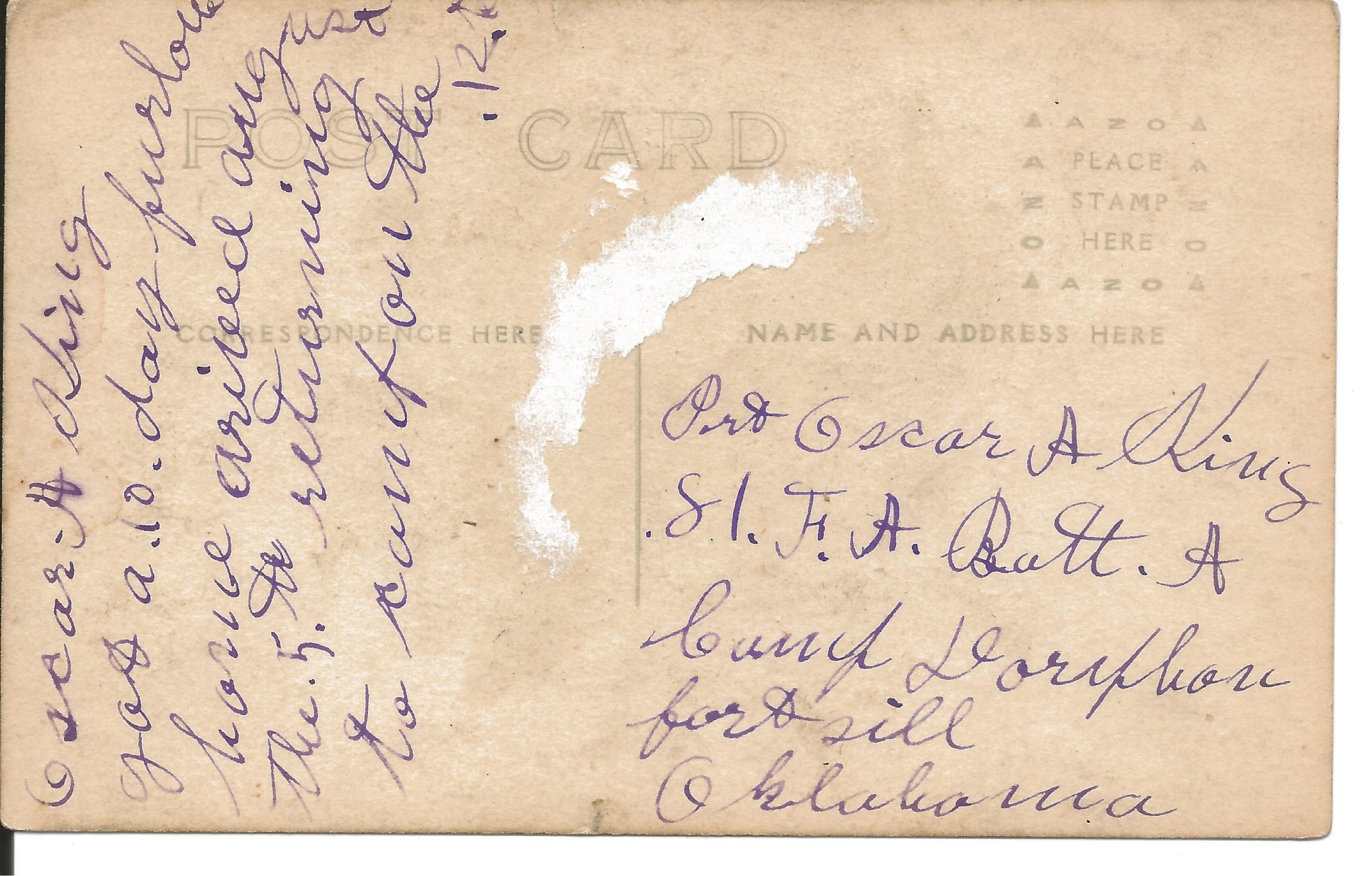 The Eighth Division went by train in October 1918 to Camp Mills on Long Island, just east of New York City, to ship out to Europe. On November 2, 1918, Oscar’s unit was called to embark. There is a notation next to Oscar’s name indicating he was in the base hospital at Camp Mills. [9] It’s likely he was ill, was it influenza? He would have been very lucky to have avoided becoming infected. According to records, about 3000 men at Camp Mills were diagnosed with influenza in October 1918. I found the report to the right regarding influenza infections at Camp Mills. [10] Note the comment about the impact of long railroad trips.

The war ended November 11, 1918, and troops began returning from overseas for discharge. Oscar received his discharge on December 24, 1918. Army bases were greatly affected by the flu. Did Oscar have the 1918 influenza? I will never know, but the records suggest its possible.

I cannot be certain if my great aunt or great uncle were infected with the 1918 influenza. But, I can be certain they both were exposed to the virus. Was luck on their side?

While researching for this post, I came across an interesting article about the response in Indianapolis to the 1918 influenza pandemic. The city took swift action and prohibited gatherings of more than 5 people, closed non-essential businesses, had essential merchants stagger their hours, they made the trolley cars open air only, required gauze face masks and encouraged frequent hand washing. These actions kept the city’s infection rate much lower than other cities, and deaths to 290/100,000. See the link below for the article. [11]