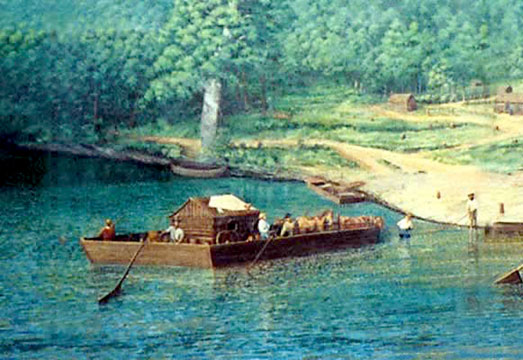 My fourth-great grandparents, David (1758-1807) and Margaret (1758-1804) McCash, arrived at the port of Philadelphia in 1787. [1] They had immigrated from Glasgow, Scotland to make a better life for themselves and their children. Their three children who traveled with them were all under the age of five. After provisioning themselves, they joined a group traveling overland to Pittsburgh. Once there, they boarded a flatboat and went down the Ohio River to Limestone, KY with the intent of acquiring land and homesteading. In Scotland, David McCash had been a blacksmith, but probably had some farming skills.

In 1782 a Pennsylvania farmer named Jacob Yoder became the first person to successfully navigate a flatboat from Brownsville, PA to New Orleans. This feat demonstrated how the rivers could be used to reach distant markets and to settle the West. [2] The typical flatboat for families going west was about 16 ft. wide by 55 ft. long. With a shed aft for horses and cattle, and a cabin in the fore for people. A basic flatboat only had a sandbox fireplace. For navigation, all flatboats were propelled by “sweeps” which were mounted on the sides and used for directing the flatboat into the current, they also had a rudder and a short oar in front. The flatboat was often called “the boat that never came back.” It typically was broken up at the end of the journey and the lumber used for building houses for the homesteaders. [3] 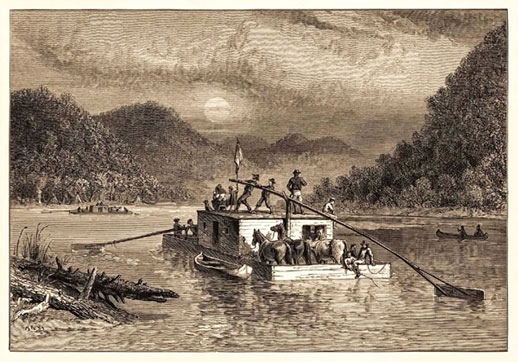 Another use for the flatboats was discovered by General Josiah Harmar, 1753-1813. General Harmar was Commander of the US Army at Ohio, and he had noticed the large number of flatboats descending the Ohio River. He ordered an account of the boats that passed the garrison at Muskingum, OH. From the 10th of October 1786, until the 12th of May 1787, 127 boats, 2,689 people, 1,333 horses, 756 cattle and 102 wagons passed Muskingum bound for Limestone. General Harmar recognized the value of the boats. In 1788 he purchased at Limestone about 50 flatboats at the moderate price of $1 to $2 each. He used the lumber from the boats to construct Fort Washington at Cincinnati. [4]

While researching flatboats I came across a charming old movie intended for school children. This “Instructional sound film” by ERPI Classroom Films, Inc. in 1941, run time 10:18, black and white, with the help of Thomas D. Clark from the University of Kentucky is part of the Prelinger Archive on archive.org. [5] Follow this link to view the movie: https://archive.org/details/flatboatmen_of_the_frontier

European-American settlers traveling down the Ohio River in the late 18th and early 19th century found a natural harbor at Limestone Creek on the Kentucky side of the river. At Limestone the boats became so numerous they frequently were set adrift in order to make room for others. In 1784 a man named Simon Kenton built a blockhouse at the site and founded Kenton’s Station. Then, in 1786, John May acquired the land at Limestone and renamed the place Maysville, as it is called today. [6]

My McCash ancestors, after surviving the river journey to Kentucky, became homesteaders. It was there, near Limestone, that my 3rd great grandfather James McCash was born on August 26, 1788. The family evidently were successful farmers and also traders. I discovered David McCash mentioned in a book about the early history of Cincinnati, OH. In 1792 David arrived by small boat at the Stone Landing near present-day Cincinnati bearing all manner of fresh produce. At this time the settlement was primarily Fort Washington and the arrival of quality foodstuff was very welcome. [7] A year later David moved his young family to the north side of the river and established a homestead in present-day Cincinnati near the current intersection of Walnut and Third Streets. [8] Steps away from the baseball stadium and probably beneath I-71. There, the family continued to farm and supply provisions to the Army. [9]

I like to imagine my McCash ancestors arriving at their first homestead on a flatboat for their transportation with just the necessities to begin a new life in America. Making the trip across Pennsylvania and then down the river with three very small children is hard to imagine though. It must have taken determination and grit. All three of their immigrant children survived well into adulthood. Their eldest son William, 1783-1871, and their American born son James, 1788-1871, have thousands of descendants alive today. 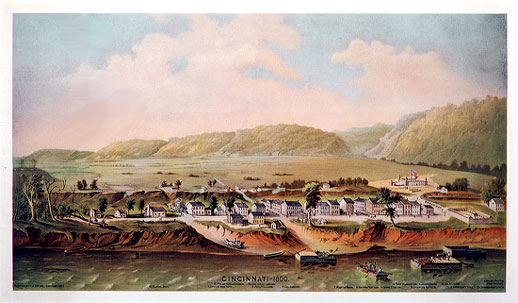 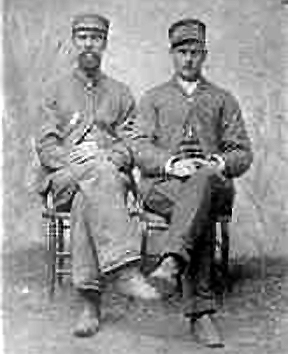