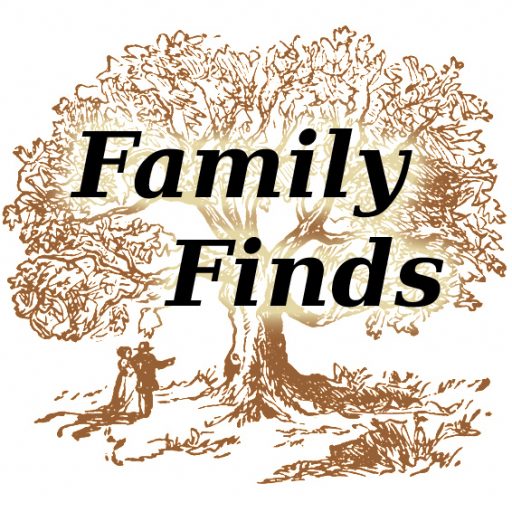 This is the best photo I have of my grandmother, Edith Viola King 1903-1991, and all her siblings. Sadly, her sister Roxanne died not long after this picture was taken. 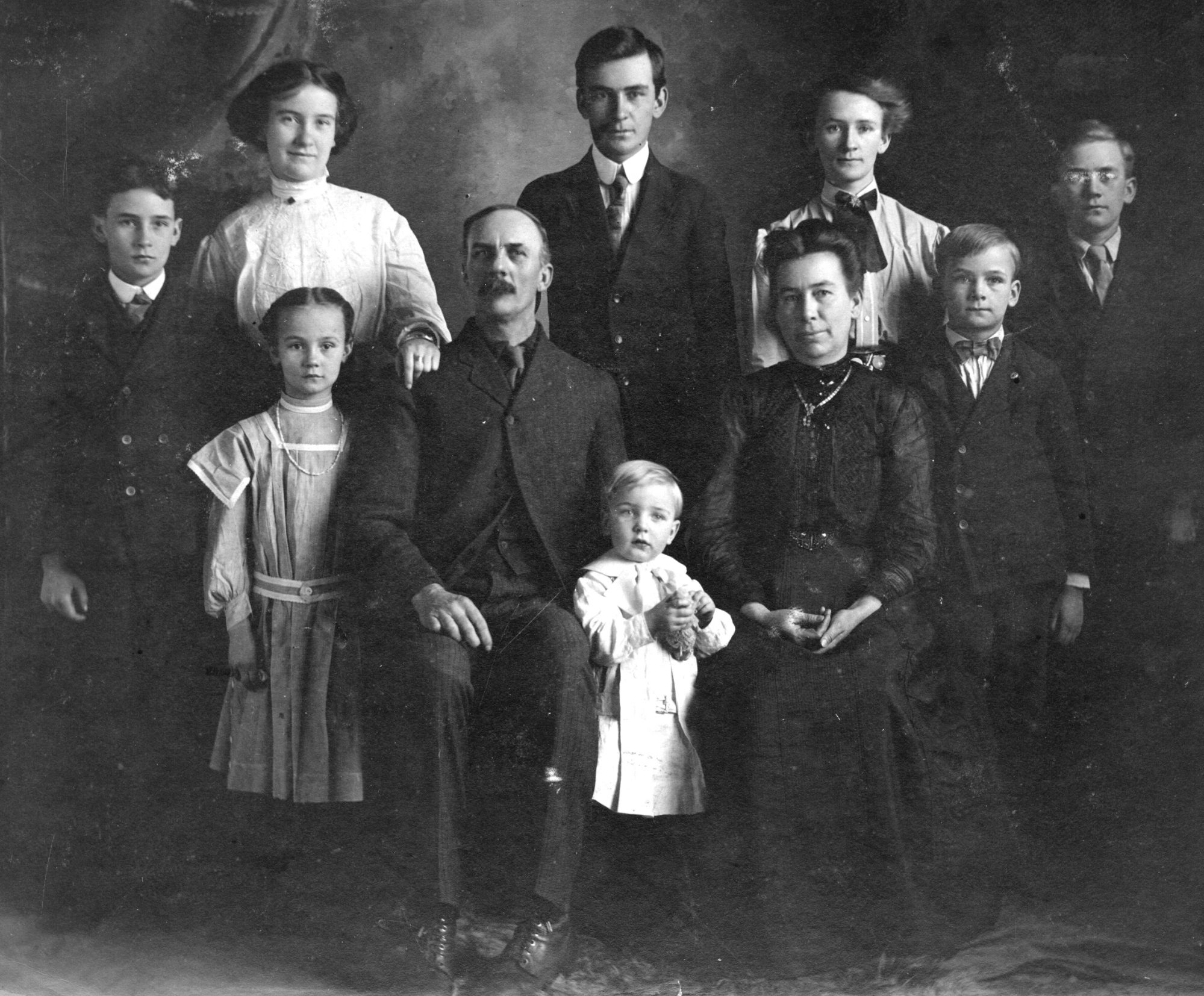 Elsie May King, 1890-1984, was born in Rockford, Ohio but lived most of her adult life in Warsaw, IN. She was married twice and had two children with her first husband: Zue and Thurman. At various times Elsie was a landlady and beautician. [1]

Charles W. King, 1893-1968, was born in Van Wert, Ohio but lived his adult life in Detroit where he worked in the automotive industry. He was a machinist at Fisher Body and, at one time, a model maker for Packard. Chas also served in the Navy for a couple of years during WWI. He married twice, but had no children. [2]

Roxanne F King 1895-1911, was born in Van Wert, Ohio but sadly died at just 16 from complications of diphtheria. A photo of Roxanne in an over-sized coat and hat can be found in my post, Favorite Photo. [3, 4]

Oscar Allen King, 1897-1985, was born in Rockford, Ohio but lived most of his adult life in Troy, Michigan where he worked as an auto mechanic. Oscar served in the Army during WWI, I wrote about his service in a post last year, Luck. Oscar married twice and had two children with his second wife: Jimmy and Joyce. [5, 6]

Raymond O King, 1899-1989, was born in Adams County, Indiana, and lived in Allen County, Indiana his entire adult life where he was a farmer for 70 years. His farm was on the County Line Rd., north of Leo-Cedarville. Ray married twice and had two children: Opal and Reynold, with his first wife Minnie. A photo of Ray and Minnie’s 1920 wedding was included in last years post, Wedding. [7, 8]

Lee Roy King, 1902-1922, was born in Adams County, Indiana, and sadly died at just 20 years old from tuberculosis. Lee worked for a time doing manual labor for the local electric company before becoming too ill to work. [9]

Warren Leander King, 1908-1968, was born in Dublin, Ohio and lived most of his adult life in Troy, Michigan where he worked in the automotive industry. Warren learned plating as a young man and worked as a fabricator and machinist. He married twice and had two sons: Harold and Richard, with his first wife. [10]

I recently exchanged emails with one of my Dyer cousins who provided me with this photograph of my maternal grandfather and his four brothers. The photograph does not identify the brothers. But, I recognize my maternal grandfather, Major Dyer 1901-1973, as 4th from the left. So, the remaining four men are my great uncles Dyer: Travis 1892-1972, James 1896-1961, Dewey 1899-1966 and Lee 1904-1983. The two eldest brothers lived their adult lives in Knox County, Tennessee. Dewey lived a lot of places, but his final years were in I Mishawaka, Indiana. Lee lived his adult life in Marion, Indiana where he owned the Dyer Grocery. [11] 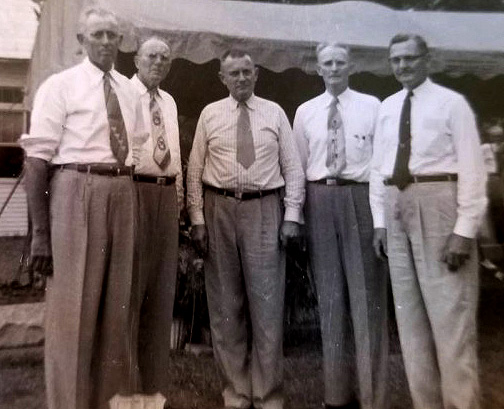 These are my great aunt’s and uncle’s Osborne photographed about 1917 with my grandmother, far left, Pearl Osborne LaFara 1893-1972. 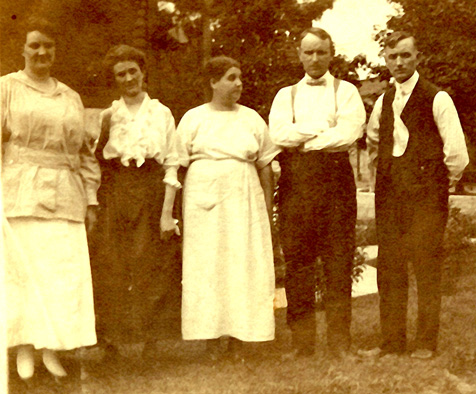 Louis Osborne, 1878-1961, was born in Terre Haute but raised in Indianapolis. Louis lived his adult life in Chicago, Illinois, and Portland, Oregon. He was a photographer and engraver for the Chicago Tribune for many years. There was a time when photographs were engraved onto metal plates for printing in newspapers. Lou married twice and had one son, Kenneth, with his first wife. [12]

Rollin Osborne, 1880-1964, was born in Indianapolis, Indiana where he spent half his adult life as an interior finisher, mostly hanging wallpaper. He then lived in Sullivan, Indiana during his retirement years. I wrote about Roll and his brother Lou living in the Indianapolis Orphan Asylum for a short time after their mother died in 1883 in a post written in 2016. Rollin married twice, he had two daughters: Alethia and Irene, with his first wife. [13, 14]

Grace Osborne, 1887-1954, was born in Minneapolis, Minnesota, but lived most of her life in Indianapolis, Indiana, and later in New Castle, Indiana. Grace, and her 2nd husband Frank, had a small poultry farm in Warren Township and while they lived in New Castle they had a commercial flower farm. Grace won awards for both her show hens and her flowers, particularly gladiolas. Grace married twice and had one son, Glenn, with her first husband. [15]

Sadie Osborne, 1888-1940, was born in Port Jefferson, Ohio, but lived nearly her entire life in Indianapolis, Indiana. Sadie graduated from the National Training School for Deaconesses in Kansas City, Missouri in 1911. She was a deaconess with the Methodist Episcopal Church for over 7 years. She served the community, particularly women and girls, through the Traveler’s Aid Society. In 1918 Sadie became one of the very first policewomen with the Indianapolis Metropolitan Police Department. I have previously written about Sadie in posts, Luck and Service. [6, 16, 17]

I did not know this line of my family. My paternal grandfather died in 1928 and my father had very little contact with the LaFara’s. I have no photograph of the LaFara siblings together. The closest I have is this photo of two of the siblings, among their cousins, with their maternal grandmother, Eliza Russell Illges. [18]

Eliza Russell Illges, 1837-1909, surrounded by her grandchildren about 1895. Elnora is front row, second from left; Nettie is the small child to the right of her grandmother; Earl (my paternal grandfather) is the blonde boy standing on the right. 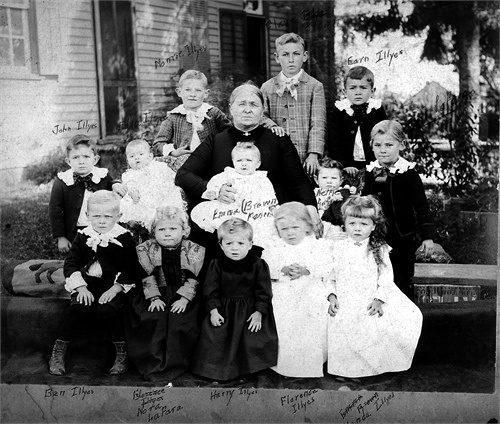 Eliza Elnora LaFara, 1889-1947, was born in Tipton County, Indiana. She married Charles Hancock in 1911 and relocated to Indianapolis. They had four children: John, Charles James and Ethel May.

Nettie LaFara, 1893-1964, was born in Tipton County, Indiana. She moved to Indianapolis with the rest of the family in 1913 and married there in 1914 to John Ellis. They had two children: Martha and John.

Ezra Russell LaFara, 1896-1985, was born in Tipton County, Indiana. After he graduated from Tipton High School in 1913, the family relocated to Indianapolis. Ezra married in 1919 and had four children: Eileen, Helen, Victor, and Harold.

Esther LaFara, 1903-2000, was born in Tipton County, Indiana. She lived most of her adult life in Indianapolis. Esther married Charles Sedam in 1922, they had nine children: Violet, Charles, Carrie, Norma, Doris, Phyllis, Russell, Peggy and Martha.

They were great, my great aunts and uncles. I’m sorry I did not get the chance to know them while they were living. Most of what I know comes from family stories and what I have discovered doing genealogy research. If anyone reading this is a descendant, reach out and help me add to their stories.

The great uncle I did know well was related by marriage. Frank Flucawa, 1883-1974, was the second husband of my great aunt Grace Osborne. The first post I wrote in 2014 was a brief biography about Frank, at the request of his alma mater Meiji Gakuin in Shirokane, Tokyo, Japan. [19] 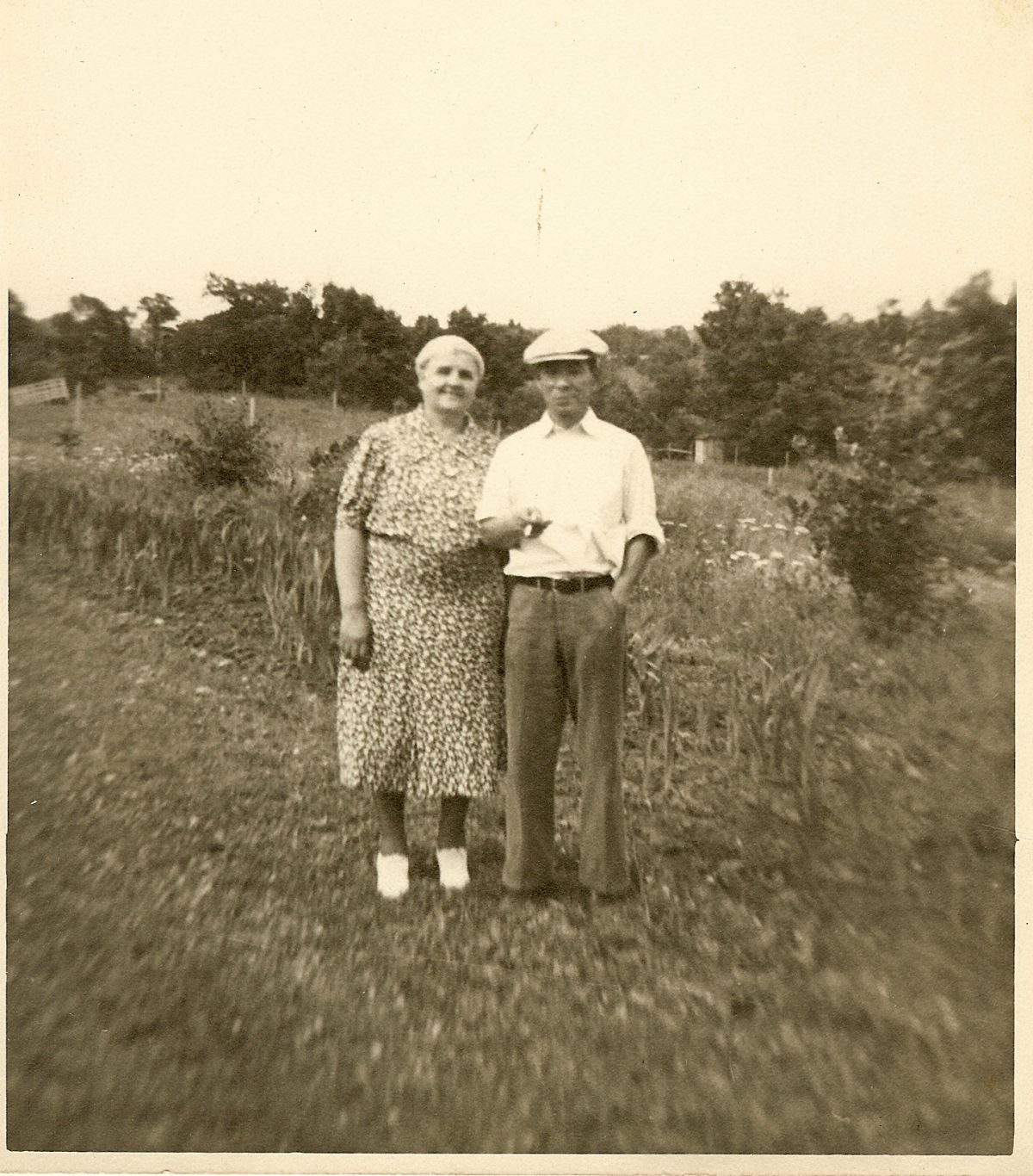