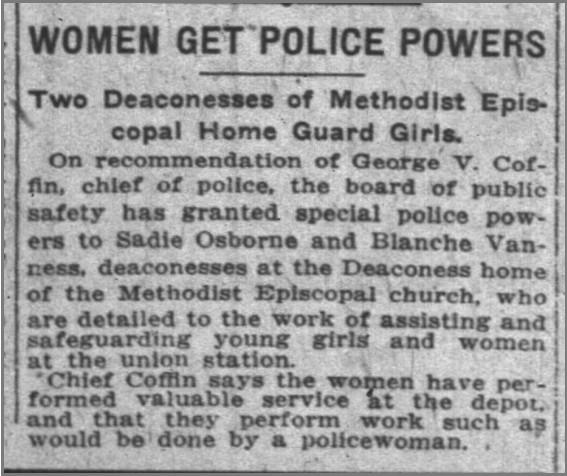 Sadie Osborne, 1888-1940, was born in Port Jefferson, Ohio, but lived nearly her entire life in Indianapolis, Indiana. [1] Sadie lived with my father’s family the last 7 years of her life, after her retirement from the police department. As a result, he knew her well and heard many of her stories. When I was a kid, and my father repeated stories about Aunt Sadie, I imagined her as Pepper Anderson of the TV program “Police Woman.” It ran from 1974-78 and starred Angie Dickenson. Pepper worked undercover to get criminals to reveal themselves. And, she always made an arrest by the end of the show every week. The character was both tough and glamorous. [2]

Sadie graduated from the National Training School for Deaconesses in Kansas City, Missouri in 1911 and was a deaconess with the Methodist Episcopal Church for over 7 years. Her role as a deaconess evolved into working for the Travelers Aid Association at Union Station and the Traction Barn where she aided women and girls traveling alone. As well as, being on the lookout for vice crimes and activities that preyed on women. Sadie’s work and position in the community led to her appointment in May 1918 as one of the first policewomen with the Indianapolis Metropolitan Police Department. 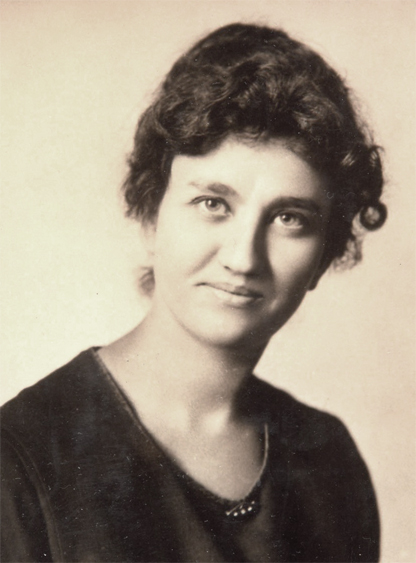 Chief of Police George Coffin recommended Sadie, and another deaconess, be given police powers. On May 1, 1918, the Board of Safety approved the request and Sadie Osborne became the first police woman in Indianapolis along with Blanche Van Ness. [7] By June 15, Chief Coffin had secured police powers for another 11 women, including one to the rank of sergeant. [8] Sadie continued to work at Union Station, but her duties expanded to include Tomlinson Hall (the farmer’s market) and the downtown shopping district.

Sadie’s application for the police position is preserved at the Indiana State Archive. It’s a typed half sheet in the form of a reference letter from an attorney for the Traveler’s Aid Association. [6]

Miss Osborne took three years training in Kansas City for the work of a deaconess under the auspices of the Methodist Church.

She has been doing active work in Indianapolis for seven years, she has been at the Union Station under the Traveler’s Aid Association. Miss Osborne is a most efficient social worker. She is intelligent and her judgment is good. She has a most pleasing personality which counts for much in her work. In her work with girls she has been most successful. Her experience fits her particularly for the work in the police department. 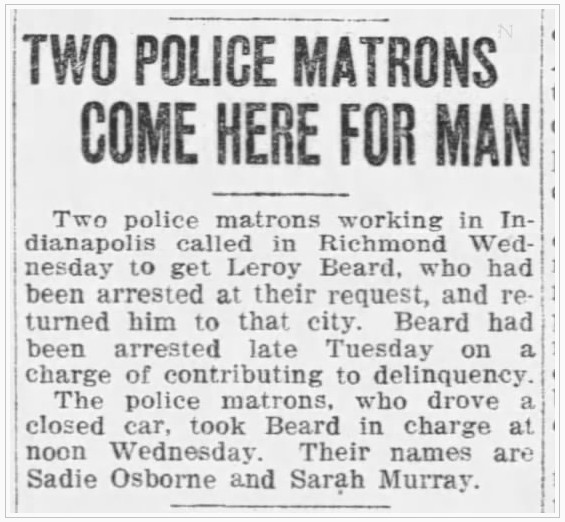 The stories my father told described Sadie breaking up gambling enterprises, illegal liquor sales (this was during Prohibition), chasing down shoplifters and the like. The few articles I have found describe some of these exploits. But, I also found she did more mundane assignments like transporting prisoners and office work. More often she was working among the poor to insure the health and safety of women, children and the elderly. [9, 10, 11] 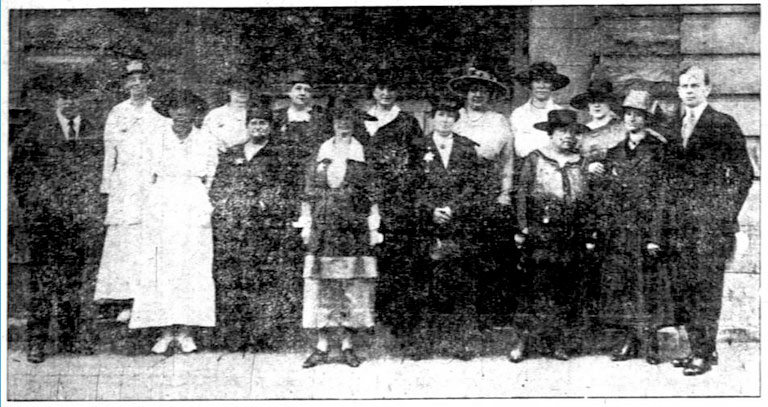 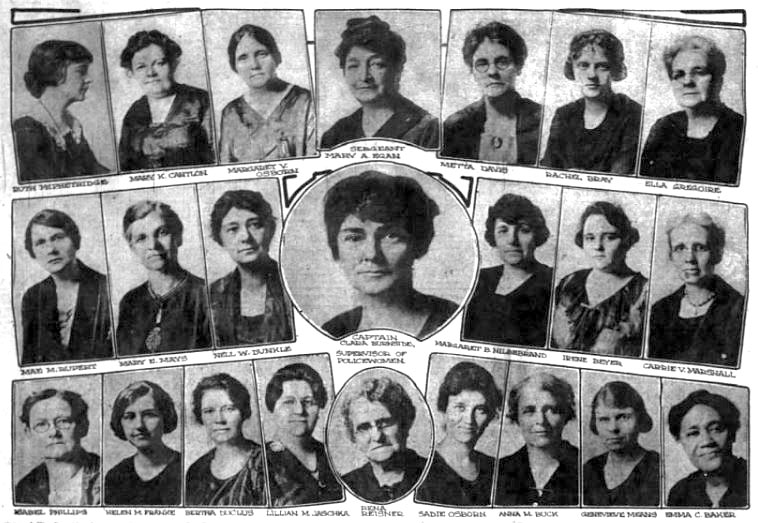 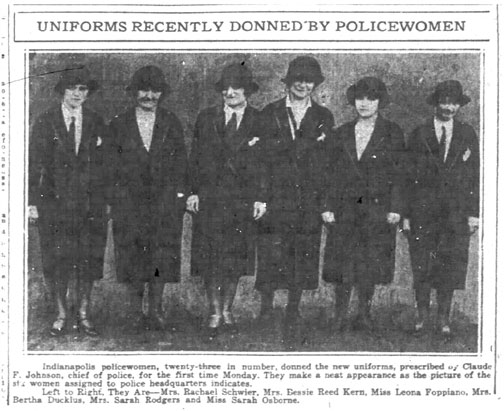 Aunt Sadie is on the far right.

As an adult I realized that my great Aunt Sadie was not a real life Pepper Anderson. But, I did discover that she was one of the first police women, not only in Indianapolis but in the United States. That part of her story was not in the tales my father told. I wonder if he knew she made history? For much of his childhood, Aunt Sadie was very sick. By 1932, Sadie’s failing health led to her retiring from the IMPD. [12, 13] Soon after, her home was foreclosed and she went to live with her sister Pearl (my grandmother.) Sadly, Sadie died from metastasized breast cancer on January 28, 1940. [14]

In 2018 the Indianapolis Metropolitan Police Department held a ceremony to commemorate 100 years of women on the police force. Part of the ceremony specifically paid honor to the first 13 women who received police powers in 1918, including my great Aunt Sadie Osborne. [15] 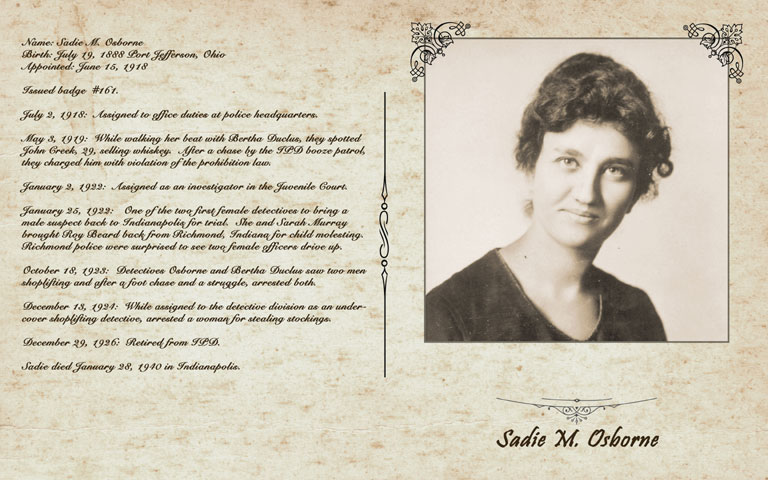