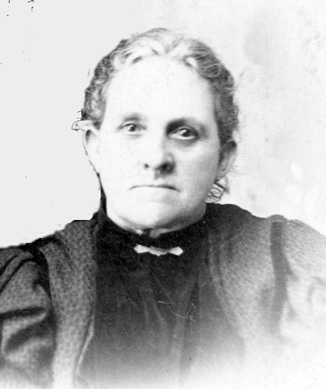 While researching my ancestors I sometimes wonder at the personal strength they must have had to face the many adversities in their lives. Particularly when I discover the death of a spouse or child, I consider, with admiration, how the rest of the family carries on. I suspect many found strength through their faith, and the practical aspects of their lives. My farming ancestors would need to continue to care for their livestock and crops. Additionally, most these farming families were large and a widow or widower must find a caretaker or provider for young children. This week I consider the case of my great-great grandmother, Elizabeth Ellen Hammond.

Elizabeth Ellen Hammond was born on 2 July 1844, in Holmes County, Ohio, to Mary Elinor Spicer, age 33, and John Milton Hammond, age 45. She was their 8th child, although two of their children had died prior to Elizabeth’s birth. By 1857 the family had relocated to Mercer County, Ohio, just west of Celina. It was in July of 1857 that Elizabeth’s older sister Eliza Jane married John King. The Hammond farm was very near the King farm in Mercer County. Six years later, Elizabeth Ellen Hammond married William H King, older brother of John King, on 26 March 1863. Elizabeth and William had three sons and two daughters: Homer 1864, Theresa 1867, Wm Franklin 1869, Charles 1871, Jenette 1875.

Elizabeth experienced several personal losses in her early life. Two of her siblings had died in 1851. Then in 1872 two of her young children, Theresa and William Franklin, died of “brain fever” just a month apart. (Brain fever is an antiquated term that probably referred to scarlet fever.) In September 1873, Elizabeth’s sister Eliza Jane and brother-in-law John King succumbed to typhoid fever, leaving behind 6 children. Although their infant son Henry Logan King died a month later. Then, in July 1876, Elizabeth’s mother Mary Spicer Hammond died. But, perhaps the hardest loss was when William died on 24 September 1876 after a brief illness at the age of 43.

Above is a present-day map of Mercer County, OH with locations of the King and Hammond farms. At right is Elizabeth Hammond King Springer from about 1895. 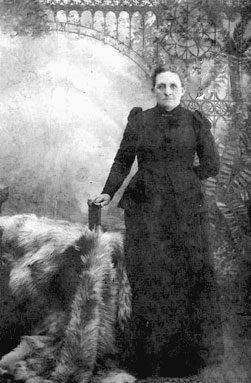 Above is the death record for the King children Theresa and William in 1872. Cause of death is given as “brain fever”.

Brain fever describes a medical condition where a part of the brain becomes inflamed and causes symptoms that present as fever. The terminology is antiquated. Conditions that may be described as brain fever include:

Elizabeth, at the age of 32, found herself a widow with three young children, ages 10, 5 and 1. Her mother was deceased, as was her closest sister. To make matters worse, William had mortgaged the farm just a year before his death and the first balloon payment was nearly due. William King’s probate record is a wealth of information about his finances and how Elizabeth navigated her early widowhood.

I’ll write a post sometime about this probate file and some of the more interesting items.

According to the probate records, various men were hired to perform the hard labor on Elizabeth’s farm. The harvest in the fall of 1876 was enough to pay the first balloon payment on the mortgage. There was an estate sale that also raised some money, but it was not much. Most items sold for less than $1, except for the livestock. But, there was enough money for Elizabeth and her children to purchase the basic necessities: food, fabric, shoes. The estate administrator, Mr. Addy, then arranged for a private sale of the farm and that paid off the mortgage and settled the remaining debts. Elizabeth was left with just a few hundred dollars. So, she did what any prudent woman of her time did, she remarried.

Elizabeth Ellen Hammond King married Joseph Springer in Mercer County, Ohio, on 29 May 1878, when she was 33 years old. Joseph Springer was 30 years old and worked as a farm laborer. He was a first cousin to the husband of Elizabeth’s youngest sister Savilla. Elizabeth and Joseph had one son. Jesse Jasper Springer was born on 12 April 1880 in Rockford, Ohio. By all accounts, Joseph Springer was a good surrogate father to Elizabeth’s other children. Sadly, Joseph passed away on 15 June 1900, in Black Creek Twp, Ohio, at the age of 52. They had been married 22 years. 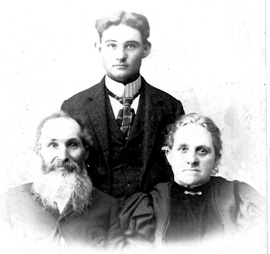 Elizabeth and Jesse managed on their own for awhile, but again Elizabeth decided to remarry. This time she married a widower, 12 years her senior! Elizabeth Ellen Hammond King Springer married Phillip B. Kuhns in Mercer County, Ohio, on 2 July 1908, when she was 64 years old. Phillip had 9 adult children and had been a widower for about 4 years. The marriage lasted almost 4 years, Phillip passed away on 4 March 1912 in Mercer County, Ohio, at the age of 80.

Elizabeth spent the next several years renting a home in Celina with her son Jesse, while he worked as a laborer in the construction industry. Then, in 1925 she went to live with her daughter Jenette (Netta) in Ft. Wayne, IN. Netta was married to Charles Cavender since 1895 and had 4 children. The Cavender’s lived at 722 Home Ave, Ft. Wayne. It was at this home that Elizabeth Ellen Hammond King Springer Kuhns passed away on 3 February 1928 at the age of 83 years and 7 months. Elizabeth is buried in Prairie Grove Cemetery. 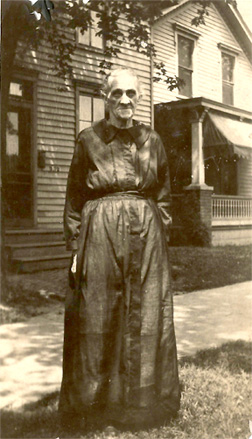 My great-great grandmother showed a lot of strength in the face of so much personal loss. The deaths of young siblings, young children, and 3 husbands must have tested her resiliency. Elizabeth also faced the financial challenges that many women of her era did. I have wondered how she would describe her life and it’s adversities. She probably viewed herself as an ordinary woman, and a farmers wife, dealing with issues common to women of her time.

I have previously written posts about others of my ancestors who persevered through adversity: